The ninth London Chess Classic kicks off at the DeepMind Google HQ on 1 December 2017 and will continue at the Olympia Conference Centre from 3 to 11 December 2017. 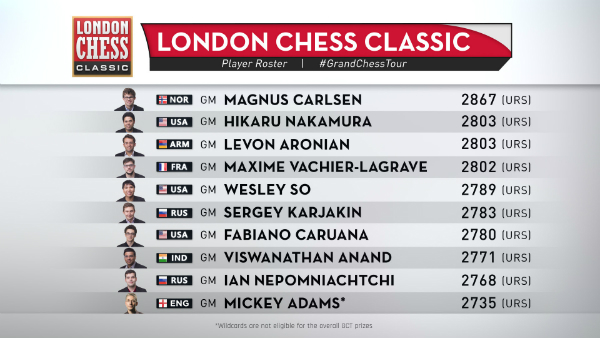 Grandmaster John Nunn will take on 20 players in a simultaneous display at the London Chess Classic on Wednesday 6th December at 6:00pm in the foyer. John is a famed author, problem-solving World Champion and former top-ten player.

Grandmaster Jon Speelman will give a simultaneous display over 20 boards at the London Chess Classic on Monday 4th December at 6:00pm in the foyer. Jon is a famed chessboard maverick, and a former World Number 4 and World Championship semi-finalist.

All proceeds will go to Chess in Schools & Communities.

Some of the capital’s greatest business minds will go head-to-head this autumn, competing alongside the best chess players in the world.

Applications are open for amateur players to compete in its annual Pro-Biz Cup fund raiser, part of the charity’s flagship event, the London Chess Classic.

In the Pro-Biz Cup, the elite of the business world are invited to pit their wits alongside and against the world’s top chess grandmasters. Amateurs team up with professionals, playing in pairs and making alternate moves in a battle on the board and against the clock.