The 7th London Chess Classic, which constitutes the last leg of the inaugural Grand Chess Tour, kicked off at Olympia Conference Centre this afternoon. The tournament got off to a perfect start as it was publicised on primetime TV last night, when Magnus Carlsen was a guest on BBC’s ‘One Show’. In case you missed it, you can replay it on the show’s Facebook page. 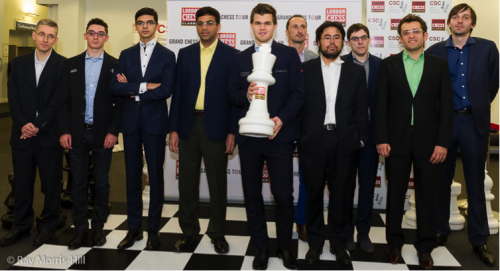 The 10 participants of the 7th London Chess Classic

As for the actual chess action, Anish Giri was the only winner of today’s first round, as he mated Veselin Topalov, after the Bulgarian lost control of his advantageous position. While Vachier Lagrave-Carlsen, Anand-Adams and Caruana-Aronian were all balanced draws, Nakamura achieved a winning position against Grischuk, but ended up missing a couple of chances and had to settle for a draw. 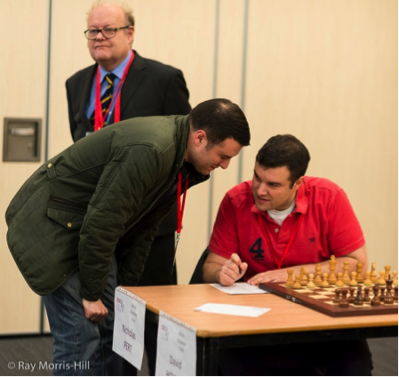 In the British Knockout Championship Final, David Howell held Nicholas Pert to a draw with the black pieces. Pert had a chance for an advantage in the opening, but after he failed to seize it, the game ended in a draw when all the pieces were about to be exchanged.

In the FIDE Open, there were a lot of surprises in the first round, despite the big rating disparities between players. Several players held their higher rated opponents to a draw, but four even overcame a 400-500 rating point gap to create the day’s biggest upsets: Roger de Coverly, Toni Riedener, Sacha Brozel and Jake Hung.

One of the schools participating in the CSC activities

A detailed report of round 1 of the London Chess Classic by John Saunders will be on the official website shortly. You can already find photo galleries of the Classic, the junior events as well as other events (such as the British Knockout Championship Final and the FIDE Open) on Ray Morris-Hill’s website. All the results and tournament details are up on the LCC website. You can also download the PGN files of the games by clicking on the following links:

Topalov, Gelfand, Mamedyarov share first place in London Grand Prix
Heading into the final round of the London FIDE Grand Prix the Azeri player was holding half a point lead ahead of Topalov, Grischuk ...