After yesterday’s five draws, it looked like there could be up to four decisive results in today’s 3rd round, but many missed opportunities meant Maxime Vachier-Lagrave was the only player to bring home the full point, thus joining Anish Giri in the lead with 2/3. 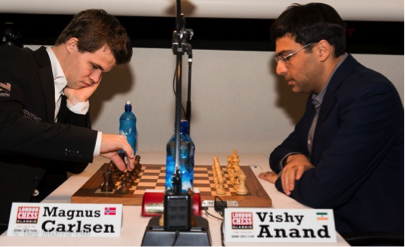 In the most highly anticipated clash of the day, Carlsen chose to meet Anand’s Ruy Lopez with the Berlin Defence, an opening that famously played a huge part in both their World Championship matches. Anand came out of the opening with a favourable position, but a few inaccuracies before the time control left Carlsen in the driving seat. However, the World Champion failed to convert his clear advantage and the players eventually agreed a draw on move 57. Carlsen was clearly displeased after the game, stating: ‘It was a bit embarrassing for both of us’. Another player who came very close to tasting victory was Alexander Grischuk. The Russian virtuoso spent 1 hour and 3 minutes(!) on 20.f4, but subsequently reached an almost winning position. Having run very short of time though, he missed the necessary precision to convert his advantage and a draw was agreed – meaning Anish Giri remains unbeaten in the Grand Chess Tour. Caruana will also be disappointed tonight, as he failed to convert a position that seemed to be technically winning in the US derby against Nakamura. Adams meanwhile scored his third draw – against Aronian – despite having been a tiny bit worse out of the opening. This leaves us with the only decisive game of the day: Vachier-Lagrave was outplaying Topalov, and the Bulgarian decided to sacrifice a rook to try and find a perpetual. However, he ran out of checks only two moves later and saw himself forced to resign.

A look into the fully packed East Hall

In the British Knockout Championship Final, Pert used the white pieces to good effect, managing to put Howell under considerable pressure. However, there was never any clear path to a decisive advantage, and a draw was agreed in an opposite-coloured bishop endgame.

In the FIDE Open, a string of draws on boards 2 to 6 put top seed Evgeny Postny into the sole lead with a perfect 4/4, after he overcame Mads Andersen with the black pieces. 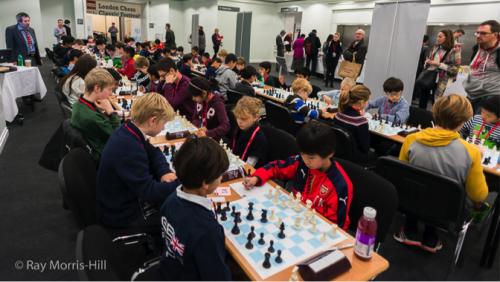 One special tournament that took place today was the English Junior Rapidplay. The event was a resounding success, as 63 children competed for the coveted title. At the end of the day, Luke Remus Elliot and Naomi Wei shared first place with 4.5/5. You can find a photo gallery of this and other junior events on Ray Morris-Hill’s website.

Several weekend events concluded today and you can find all the results and winners on this dedicated page of the London Chess Classic website.

You can now read John Saunder’s excellent detailed report of round 2 on the London Chess Classic website and the one from today’s round 3 will be available soon. You can also find photo galleries of the Classic, the London Chess Conferenceand other events (such as the British Knockout Championship Final and the FIDE Open) on Ray Morris-Hill’s website.

All the results and tournament details are up on the LCC website, while you can download the PGN files of the games by clicking on the following links: