Today’s penultimate round saw a lone decisive result, but the players treated us to plenty of fighting chess and set the stage perfectly for tomorrow’s 9th and final round in which a huge amount is at stake.

The winners of the London Chess Classic and Grand Chess Tour will be decided as well as who qualifies for next year’s Tour. 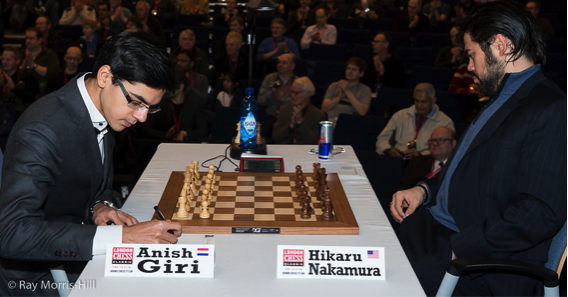 Girl-Nakamura, the only decisive game in round 8

The first game of the day to finish saw tournament leader Vachier-Lagrave draw with Adams who defended the Ruy Lopez with ease. MVL decided to repeat moves and a draw was agreed on move 37.

While this game was always balanced, the draw that soon followed between Grischuk and Aronian was a much wilder affair. The Russian joked in the post-game analysis that this had not been one of Aronian’s better opening preparations, as White got a tangible advantage. However, Alexander soon found himself in time trouble (again!) and not only let his edge slip, but even found himself worse. By his own admission, Aronian then committed the mistake of trying to flag his opponent, allowing a nice piece sacrifice which led to a perpetual check.

Carlsen and Caruana were a pawn up in their respective endgames against Topalov and Anand. Caruana had held an edge for some time but Anand had seen that the game was going to be drawn despite the pawn minus. Anish Giri demonstrated the method in an instructive live commentary.

Topalov-Carlsen was a battle of attrition with Carlsen very nearly giving us another demonstration of how he can create something from nothing. With just rook, knight and three pawns each remaining, all on the same side of the board, Carlsen managed to tie the back marker up in knots. The spectators were puzzled as to why Carlsen decided to liquidate into a drawn endgame with rook and 3 pawns against rook and 2 pawns. Giri also demonstrated the drawing plan of Ra3-Ra6 pinning the e6 pawn. Afterwards, Carlsen revealed that he needed to avoid the 50 move rule and an interesting discussion ensued as to whether the rules need a tweak, particularly in games with increment. Carlsen was always making progress and he didn’t have enough moves to fully carry out his plans. Something for everyone to ponder after the tournament.

That leaves us with today’s decisive encounter in which Giri inflicted a second consecutive defeat on Nakamura. Anish chose the best moment to produce a beautiful game, as he not only joins MVL in the tournament lead, but also moves into first place in the Grand Chess Tour standings. Giri remains unbeaten throughout the Tour, a fantastic accomplishment!

This means that going into tomorrow’s last round, MVL and Giri share the lead with 5/8, but they are closely followed by Carlsen, Aronian and Grischuk, who trail them by just half a point.

Tomorrow’s three crucial encounters are therefore Aronian-Vachier Lagrave, Anand-Giri and Carlsen-Grischuk. Chess fans couldn’t have hoped for a more exciting climax to the Grand Chess Tour, as with one game to go, four players are still in with a realistic chance of winning the Tour: Giri, MVL, Carlsen and Aronian.

An interesting subplot will also be unfolding in the Aronian-Vachier Lagrave encounter, as the Armenian will most probably have to decide the game in his favour in order to edge out MVL for the last qualification spot of the 2016 Grand Chess Tour.

A tie for first in the London Chess Classic or the Grand Chess Tour will necessitate a play-off – it could be a late night! 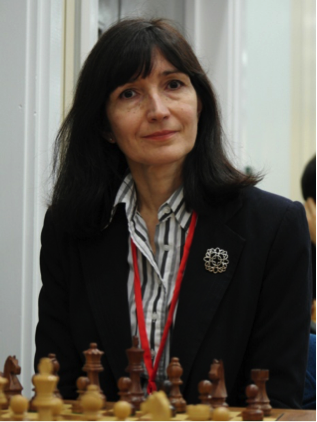 Before the start of the ‘big games’, over 350 players made their way to Olympia Conference Centre to participate in the Super Rapidplay. After 5 rounds, four players are still on a perfect score: Howell, Melkumyan, McShane and Arakhamia-Grant (who, despite her 2393 rating, took out Hawkins, Rowson and Hammer!). The tournament is incredibly strong with over 30 GMs taking part.