While the London Chess Classic players got to enjoy a rest day, there was still a lot of chess action going on elsewhere at Olympia Conference Centre, most notably with the conclusion of the inaugural British Knockout Championship.

In the 6th and final game of this novel and exciting event, David Howell outplayed Nicholas Pert to take the final by a score of 4-2 and the winner’s cheque of £20,000. Congratulations! Pert picked up £10,000 for his efforts. 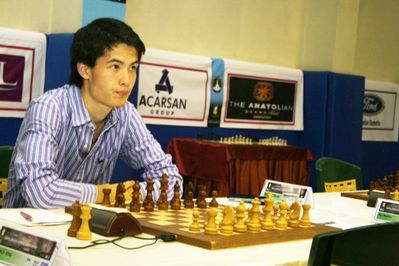 In the FIDE Open, three of the ten leaders – Evgeny Postny, Benjamin Bok and Eric Hansen – won their games and are in the joint lead with 2 rounds to go.

The rest day of the Festival’s main event is a good opportunity to take a moment and look ahead to next year’s Grand Chess Tour qualification process.

As of today, the six players with the highest rating average are Carlsen, Topalov, Anand, Nakamura, Caruana and Giri (in that order). They are followed by Kramnik, So and Aronian, while Vachier-Lagrave is only in 13th position. This means that the Frenchman will have to finish in the top-three of the GCT standings in order to make the cut.

The last 3 rounds of the LCC will thus not only determine the tournament and Tour winner, they will have the added suspense of revealing the 2016 GCT qualifiers. While it seems like Carlsen, Topalov, Anand, Nakamura, Caruana, Giri and Kramnik are almost guaranteed to qualify on rating, the remaining two spots are likely to be a close race between So, Aronian and Vachier-Lagrave – but a race where So can only watch from the sidelines.