It was a peaceful day at the Google Headquarters in London, which hosted round one of the London Chess Classic.

The day started slowly with three symmetrical positions out of the opening. It seemed that the only game that had any promise of producing a decisive result was the battle between Carlsen and Caruana until the game between Anand and Nakamura steered itself toward murkier waters. Unfortunately, neither Carlsen nor Anand were able to drive the full point home and now all the players have equal points.

It is very unusual to have a rest day after round one, but the games will resume on Sunday at the usual location of the Olympia Conference Center. 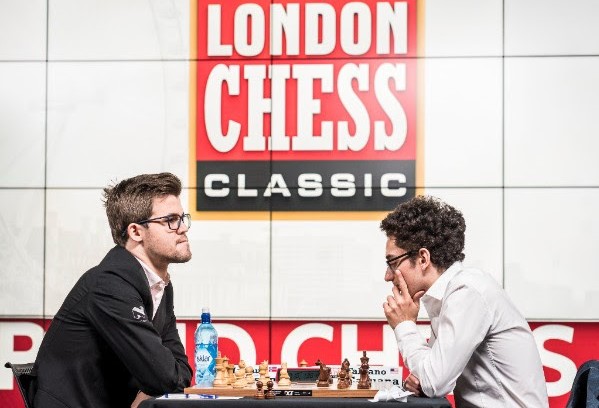 Aronian repeated the opening he played against Vachier-Lagrave during the World Cup in September which resulted in a loss.

As Levon put it himself, he likes to play something that has brought him unhappiness in the past, for he likes to prove that his play was the culprit, not the opening itself. His approach seemed to work out as Nepomniachtchi was not able to put significant pressure on his opponent, ending the game in a draw by repetition.

The American surprised his opponent in the opening by playing an anti-theoretical quiet system. Of course, the downside of playing in such a manner can be the inability to pose any realistic problems for the opponent to solve.

The Frenchman equalized without any problems and the position remained symmetrical throughout the game. The players agreed to a draw in the endgame once they reached the 30-move draw requirement.

Adams gained the upper hand out of the opening but lost the thread of the game. He felt that he had the wrong set up and his position was going nowhere as he kept shuffling his queen around.

At the end, he pulled himself together and played a few accurate moves to reach completely equality and draw the game.

This was the game of missed opportunities. Nakamura had the better position but pushed too hard and found himself defending his weakened king. Anand did not play the most precise way and suddenly both kings were in provocative positions.

Nakamura offered a draw in a complicated position. Anand regretted agreeing to a draw quickly instead of spending twenty minutes to calculate all the intricacies of the position but felt that the draw was still a good result.

This was the longest game of the round with a disappointing result for the World Champion as he failed to convert his advantage. Carlsen never missed a clear win, but the accumulation of small mistakes prevented him from scoring the full point.

Caruana fully earned his half a point by putting up a tenacious defense. Both players were exhausted after the lengthy battle and were looking forward to having a rest day tomorrow.