No blood was spilled during round two of the London Chess Classic, however, many of the games were combative.

Early in the round there were several enterprising middlegame positions which looked promising; yet, bringing the full point home is an extremely daunting task as all the players are extremely good defenders.

The fighting spirit the players showcased today demonstrates that everyone is eager to play until the very end in the hopes of scoring a victory.

The tournament has settled into its normal routine as the playing venue has returned to its permanent location at the Olympia Convention Center. The rest of the tournament promises to be full of exciting games. 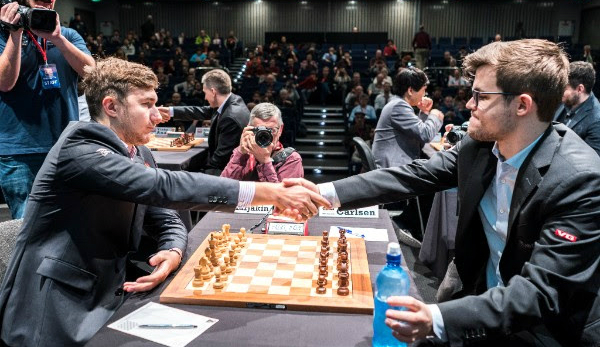 The World Champion’s opening showed that he clearly came to fight. He opted for the lesser known but aggressive 9…g5 in the Giuoco Piano. Karjakin was familiar with the line, as a fellow Russian player Maxim Matlakov had won a nice game with the black pieces in that line. Karjakin played a novelty and the position became very sharp.

Carlsen admitted that he wanted to play aggressively but went for the endgame at the first opportunity. Karjakin had one opportunity where he could have tried to play for the advantage; but, once the moment passed, Carlsen held the equality and drew the game without any obstacles.

Caruana repeated the same line Nepomniachtchi played against Aronian yesterday. The Armenian deviated on move 15 with an idea that Caruana was familiar with but hadn’t had chance to analyze thoroughly before the game. Black achieved a structurally superior position, but White’s active pieces did not allow him to create any chances.

Aronian was quite pleased with his result as he had to play the first two games with the black pieces. Caruana was also not displeased, as he has three blacks in the first four games and just wanted to weather the storm.

The opening of this game was very unusual but transposed into a King’s Indian-like structure. For a while, this was set to be the first decisive result of the round as So had a nice advantage. Unfortunately, he misplayed the position, moving his knights to the kingside, instead of blockading his opponent’s bishop.

In a double-edged position, the players decided to end the matter with a threefold repetition instead of taking unnecessary risks.

This game promised fireworks when Nakamura chose to play the Dragon, a sharp line of the Sicilian which isn’t used very often at the high levels. It was a line he had prepared against the Frenchman during the last stop of the Grand Prix in a must win situation.

Vachier-Lagrave was surprised by his opponent, but Nakamura himself forgot the line and played an inaccuracy, handing the advantage to his opponent. Instead of keeping the pieces on the board to maintain his advantage, Vachier-Lagrave played a forcing line which lead to a rood ending where he had an extra pawn. With an extremely good defense, Nakamura was able to salvage the half a point.

These two chess giants have been battling it out for decades. Thirty-eight of their classical games have ended in a draw and this was no exception. In the quietest and most classical game of the round, Anand felt that his position was better but never managed to get anything out of it.

In the endgame, Anand had the superior minor piece and more activity; however, his opponent’s passive defense was enough to hold the draw. Anand felt like he was better but never managed to get anything out of it.