This year’s line-up is stronger than ever, with an average rating higher than any previous chess tournament held in the UK.

Playing for the first time is the world’s best ever woman player Judit Polgar. Completing the line-up are US champion Hikaru Nakamura and three leading players from Britain, Luke McShane, Michael Adams and Gawain Jones. 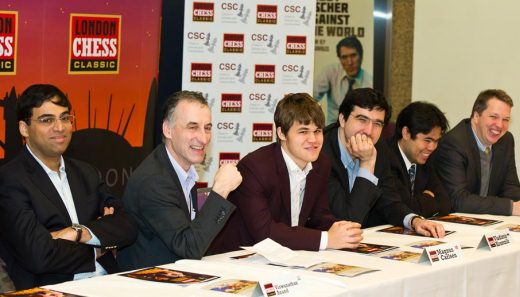 On 30 November at 1400 GMT 0900 EST there will be a press conference at the venue, followed by a London Classic Stars versus the Twittersphere exhibition match played via Twitter, allowing the world’s chessplayers to test their mettle against Carlsen, Anand and co.

The press conference will be streamed live via the net: questions are welcome and may be sent in advance to director@londonchessclassic or in real-time via the official Twitter feed, which is @LondonClassic. (Please use the hashtag #londonchess in your tweets.)

The opening ceremony for the Classic will take place at 1345 GMT on 1 December, with play beginning at 1400 GMT 0900 EST. Play will be streamed live via the official website.

CHESS IN SCHOOLS AND COMMUNITIES

The London Chess Classic is a festival of the world’s most enduring game, which is staged by Chess in Schools and Communities, a UK registered charity whose mission is to deliver chess to primary schools in UK inner cities.
(Links to recent UK national press coverage: The Independent and Mail Online)