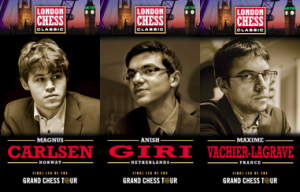 The London Chess Classics has come to an exciting lack of conclusion – a three way tie between Giri, Vachier-Lagrave and Carlsen, all sharing first position with 5,5/9. Such a result was not acceptable and the players had to settle the very rare three-way draw using the following system:

Based on tiebrakers, Carlsen is leading the pack and that leaves Anish Giri and Maxime Vachier-Lagrave to play two games of rapid chess. If they are tied again after those, they will play a single Armageddon match to determine a winner between them.

Magnus Carlsen is expecting the winner for a two game final at the same time controls.  However, in an interesting turn of events, in case Vachier-Lagrave wins both matches (against Giri and Carlsen), he and Carlsen will play in a separate playoff to decide the overall Grand Chess Tour winner on Monday.

Update 2: Magnus Carlsen wins with white in the first of two rapid games against Maxime Vachier-Lagrave.

Stay tuned for a full report