London Chess Classics 6th round has concluded and with only 3 rounds left until the winner is decided, the winner is far from clear. An exciting set of games brought us these standings:

Highlights of the day John Saunders and Fiona Steil-Antoni

Today saw the return of the Grand Chess Tour, with the identity of this year’s winner still very much in the balance. With 3 rounds to go, almost anyone could still win both the LCC and overall title.

John Saunders comments, “In the most exciting game of this round, Topalov pressed hard for a result against Mickey Adams and looked to have good prospects when Adams started to go astray and blundered the exchange. But some imprecise play let the English GM indulge his penchant for classical escapology and another half-point was chalked up on the scoreboard. Connoisseurs of horseplay will want to add this game to their collection as both players managed to uncork a deadly knight fork, one which (nearly) won and the other which definitely saved the game.” 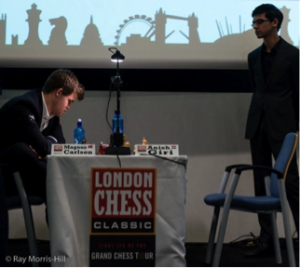 Anish Giri maintains his unbeaten record (both in the GCT and against Carlsen!)

The first result to come in today was yet another draw in a Berlin, this time in the game between Vachier-Lagrave and Caruana. Next up, drawing their encounter were Anish Giri and Magnus Carlsen, meaning the former not only remains unbeaten in all three tournaments of the Grand Chess Tour, but also undefeated by the World Champion. Nakamura and Aronian also split the point as soon as the time control was made, as there was nothing left to play for in a level rook endgame.
At this stage, it looked like the two remaining games, Topalov-Adams and Grischuk-Anand, would both end in White’s favour. Indeed, Britain’s number 1 had just blundered with 32…Ne7, missing that after 33.Nb3 a fork on c5 was inevitable. However, the Bulgarian returned the favour by overlooking a fork himself, and a draw then became inevitable. In the last game of the day, Grischuk secured his first victory thanks to a nice positional game against Anand. However, by the Russian’s own admission, he wasn’t sure he was winning had Vishy played 51…d3 instead of 51…Kd3. At the end of the day though the result is all that matters, and Grischuk joins Nakamura, Giri and Vachier-Lagrave in the lead, with each having won one game and drawn the rest. 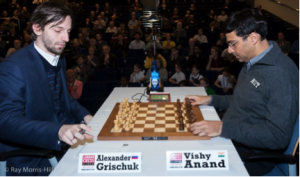 With the tournament standings remaining largely unchanged, this is a good opportunity to take a closer look at the provisional overall Tour standings. Nakamura is currently in the lead, but he is closely followed by Giri and Vachier-Lagrave. However, bearing in mind the close standings of the LCC and the fact that the tournament winner will earn 13 GCT points, a handful of players could still take home the 75,000$ cheque for the overall champion.
Unlike the LCC, there is no shortage of decisive results in the FIDE Open, where there were only two draws on the first 10 boards today. After overcoming Eric Hansen with the white pieces, Benjamin Bok is now the sole leader with 7/8, but with four players trailing him by half a point, anything could still happen in tomorrow’s last round. 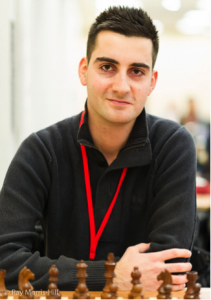 You can now read John Saunders’ excellent detailed report of round 5 on the London Chess Classic website, and the one from today’s round 6 will be available soon. You can also find photo galleries of the Classic, the Junior events and other events (such as the British Knockout Championship Final and the FIDE Open) on Ray Morris-Hill’s website.