Shakhriyar Mamedyarov took the helm yesterday for the first time and he keeps on leading the London FIDE Grand Prix after the tenth round as five out of six games were drawn.

The top seed of the tournament Hikaru Nakamura managed to win against Anish Giri after scoring four defeats in a row! So far, Hikaru was losing 26 rating points and was falling down to the 11th place in the World ranking but his situation improved today.

With one round to go Topalov, Gelfand and Grischuk share the 2nd place with “666” points, half a point behind of Mamedyarov. The last round starts at 12 p.m. 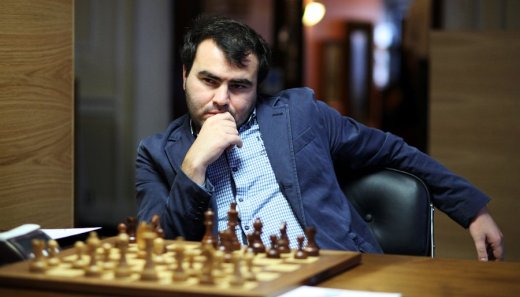 Mamedyarov appeared very relaxed when he arrived at Simpson’s with his manager. Shakhriyar played the Caro Kann defence – his opening of choice for this tournament. Wang Hao prepared a surprise for his opponent 5.Nc5 trying to stay away from the theoretical paths. “Shak” paused for thought, and then replied 5…e5!? which caught Wang Hao unprepared, as he had not expected Mamedyarov to know this line deeply.

The forced line that followed saw a quick exchange of the queens which led to the endgame with a slightly better pawn structure for white. “Hao”-ever it was not enough and a draw was the result. 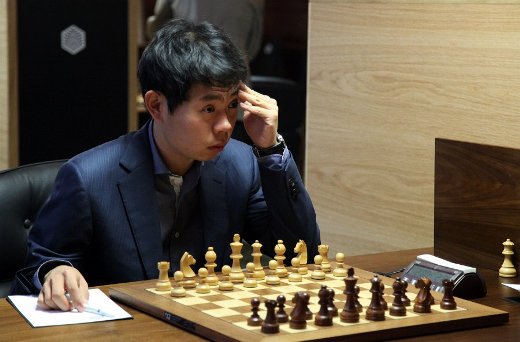 The main question was how Gelfand will recover from yesterday’s loss. Boris seemed to be in good mood and was smiling before the game. Peter Leko went for a quiet line based on Nc3-Bc4 in the closed Sicilian. Nothing much happened until move 20 after which some pieces were exchanged.

White started to take the initiative by opening the “f” file, and putting a strong bishop on d5. White started to control the black squares, and the knight on e3 defended the whole white pawn centre.

Gelfand eventually found the counter-play and started activating his pieces. White was forced to exchange and finally a drawn rook endgame was reached. 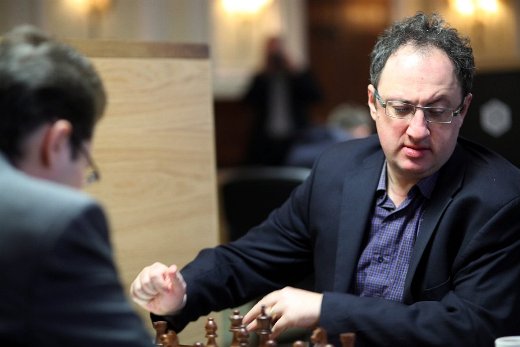 Almost all participants in the tournament want to avoid the Marshall Gambit. This game was no exception as Rustam chose the exchange line of the Ruy Lopez. White decided to open the centre and found a very interesting plan, putting the queen on “b1” in order to push c3-d4.

Sasha took a long time to play the opening and was left with only 14 minutes for the remaining 22 moves. The two times World Blitz champion is quite used to time trouble… Taking initiative on the king’s side and in centre, Grischuk increased his advantage, pressuring on the f2 pawn.

Kasimdzhanov escaped the attack when Grischuk offered the exchange of queens with 38…Qf3? The rook endgame, which appeared, was finally drawn. A disappointment for Grischuk who could have taken the lead. 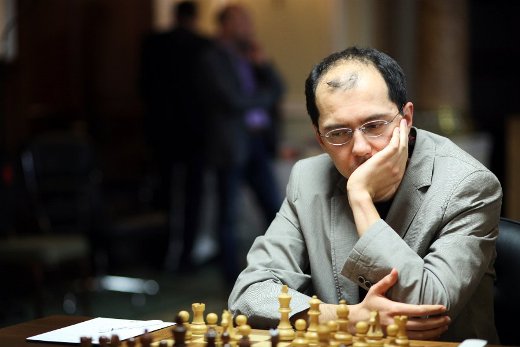 Giri didn’t change his main weapon against 1.e4 and the Petroff defence appeared once again on the board. Hikaru exchanged the queens after five moves and went to play a long endgame. White enjoyed greater space but black pieces found good placing.

The white bishop on b6 protected by the a5 pawn was controlling the queen side. Hikaru settled his other bishop on another strong square e6.

The position of Anish was very solid but Hikaru managed to break through with a nice exchange sacrifice and finally win the game!

The only chance for Veselin to catch the leader was to win today with white pieces against Michael Adams. We saw one of the first Queen’s Gambit of the tournament, which looked pretty safe for black. Veselin managed to double black’s pawns on the “b” file and took a small advantage in the endgame but it was not enough to convert into something more. 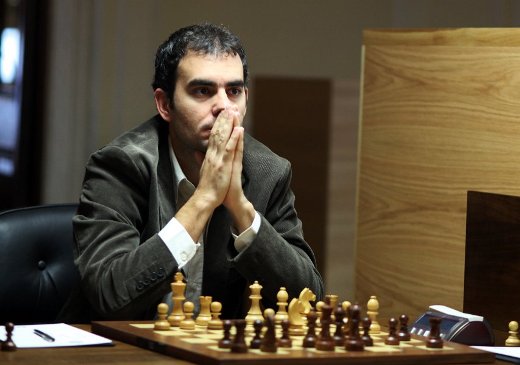 Vassily was in good mood before the start of the game, looking at the pictures of Staunton on the Simpson’s in the Strand walls. The famous Immortal Game between Adolf Anderssen and Lionel Kieseritzky was played in the same building on 21 June 1851.

The Ukrainian played a rare line of the Spanish opening (4…d6). Leinier replied with a safe development, putting all his pieces in the centre and obtained a slight advantage, due to the doubled black pawns on c7 and c6.

Ivanchuk managed to exchange the queens and equalize by putting a strong Bishop on e3. Draw. 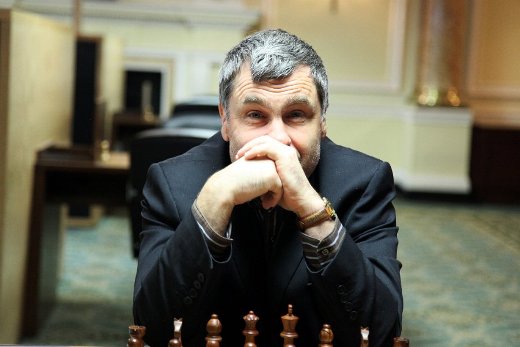