Lu Shanglei of China won the World Junior Chess title by defeating Aleksander Indjic of Serbia. In the girls section Aleksandra Goryachkina had successfully defended her title with a round to spare yesterday.

Intense, exciting tussles on the top boards yielded just one decisive result – Lu Shanglei of China defeating Aleksandar Indjic of Serbia, which was enough to crown him the World Junior Chess title at Hotel Hyatt, Pune.

The Championship was organized and conducted by Maharashtra Chess Association under the auspices of AICF and FIDE.

Vijay Kumar presents the video from round 13 and closing ceremony.

In the final 13th round, the race for the title was wide open with four players Wei Yi of China, Duda Jan-Krzysztof of Poland, Vladimir Fedoseev of Russia and Lu Shanglei, in contention for the title as all were overnight joint leaders with 9 points.

There was a four way tie from second to fourth position where Wei Yi of China secured silver, Vladimir Fedoseev of Russia bagged bronze while Duda Jan Krzysztof was a trifle unfortunate to go without a medal, finishing fourth after the resolution of the tie-break by the Buchholz system. All four players had scored 9.5 points.

Vidit Santosh Gujrathi was the best Indian finisher with 9 points and was placed fifth. Shardul Gagare was the best performer from Maharashtra and was awarded the Pune Mayor Cup in the Open section. 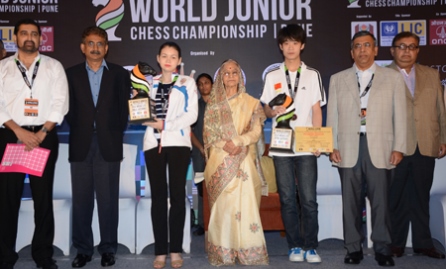 In the Girls section 16-year-old Alexandra Goryachkina had successfully defended her title with a round to spare yesterday and today settled for a short draw against Anna Iwanova to raise her points tally to 11.

Ann Chumpitaz of Peru also drew against Sarvinoz Kurbonboeva while Sarasadat Khademalsharieh of Iran defeated Srija Seshadri of India to bag the bronze, both tallying 9.5 points each. After the tie-breaks Sarasadat secured the silver medal and Chumpitaz had to settle for the bronze.

Padmini Rout was the best Indian finisher with 9 points and was placed fourth. Rucha Pujari was the winner of the Pune Mayor’s Trophy for Girls as the best performer from Maharashtra.. Today Padmini scored a quick victory over Marina Brunello of Italy. Srija Seshadri had scored 8/11 but lost the last two rounds to finish tenth.

Both Lu Shanglei and Aleksandra Goryachkina earned a qualification slot for the World Cup 2015 for Open and Women respectively. The World Cup is a part of the World Championship Cycle. Both players also received a cash Prize of Rs 1,50000 each. The silver Medalists were richer by RS 100000 each and the bronze medalists by Rs 50000.

This 13 round grueling Swiss League event was sponsored by LIC and Government of Maharashtra and Amanora, ONGC, Jain Irrigation and Everstone were the Associate sponsors. There were 132 players from 51 countries in fray while the Girls section had 77 players.