The Russian Chess Championship Superfinal, the 67th for men and the 64th for women, is taking place from 27th November till 8th December in the city of Kazan, in a branch of the State Museum of Fine Arts of the Republic of Tatarstan (the Khazine Gallery). The Superfinal is the main individual competition in the Russian chess calendar: it determines the country’s strongest male and female chess player. The tournament is a follow-up of the Chess in Museums project, an international programme run by the Russian Chess Federation (RCF) in conjunction with the Elena and Gennady Timchenko Charitable Foundation.

The Superfinal’s participants are playing in a hall hosting an exposition of paintings by Nicolai Fechin, a famous artist born in Kazan. The works exhibited in the hall include the famous pictures Slaughterhouse and Showering with Water. Students of the Fechin Kazan Art School are attending the tournament every day to do sketches of the players. When the competition finishes, the jury will award prizes to the authors of the best works.

The leader of the men’s tournament, Igor Lysyj, lost to Vadim Zvjaginsev with Black. White got a promising position in the opening but allowed several exchanges and the game simplified. When the worst seemed to be behind Black, Igor made a fatal blunder and White scored a win with precise moves.

Alexander Morozevich and Nikita Vitiugov had a sharp position after the opening. In a key moment, White failed to find the best line winning a piece, after which the position simplified and gradually equalised. The opponents agreed to a draw in an endgame with opposite-coloured bishops.

Boris Grachev and Sergey Karjakin played an equal and relatively peaceful game. The Moscow players’ encounter ended in a draw immediately after the time control.

Denis Khismatullin and  Ian Nepomniachtchi’s game was also virtually equal, and they agreed to draw on move 43.

Peter Svidler and Dmitry Jakovenko signed yet another draw in an equal endgame after a long, manoeuvring game in which attack and defence balanced each other out.

The leaders of the women’s contest, Alisa Galliamova and Aleksandra Goriachkina, played a very complicated game. White was the first to gain the edge but Black then stole back the initiative. Galliamova was a pawn down but she defended very precisely and was able to trade down to an equal endgame. The game ended in a draw.

Anastasia Bodnaruk and Valentina Gunina’s encounter was very dramatic. At first, White got a big advantage and Black had to give up an exchange but, in the middlegame, Black managed to activate her pieces and equalise. In a position with an unusual material balance, the players made a few mistakes, sometimes failing to see the winning lines. Anastasia was the last to make a mistake, however, and Valentina snatched her fifth win in a row.

Olga Girya managed to win a pawn in her game against Alexandra Kosteniuk, but White failed to find a precise winning plan in the conversion stage, whereas Black defended very tenaciously. The players agreed to a draw on move 61.

Natalija Pogonina failed to convert her extra pawn in a game against Ekaterina Kovalevskaya. Black found the optimal defensive position and stopped the white pawns from advancing.

Oksana Gritsayeva was unable to counter the difficulties in her game with Alina Kashlinskaya  and got into a very bad position in the middlegame. Alina played precisely and gained a decisive edge; Oksana surrendered owing to the inevitable material losses.

After seven rounds, Igor Lysyj leads in the Men’s tournament with 4.5 points. The leaders of the Women’s tournament are Alisa Galliamova, Valentina Gunina and Aleksandra Goriachkina, with scores of 5 points each. 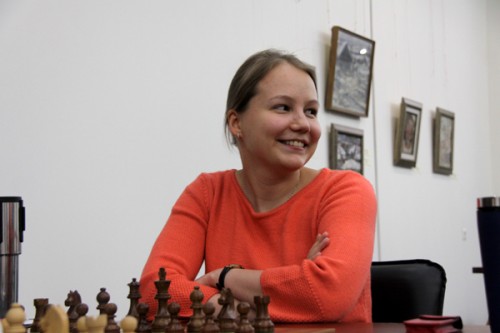 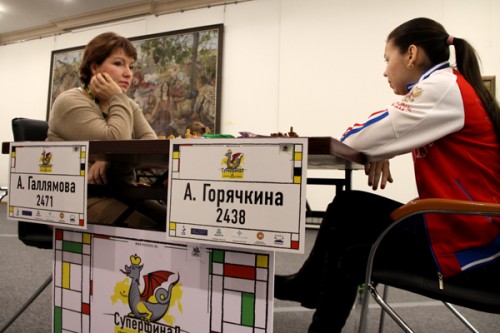 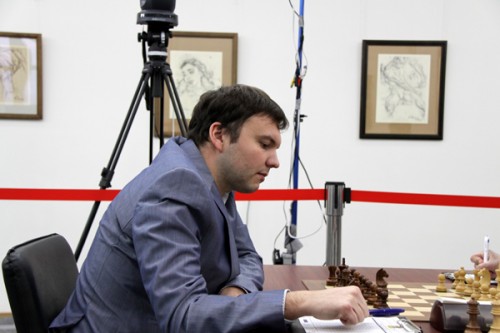 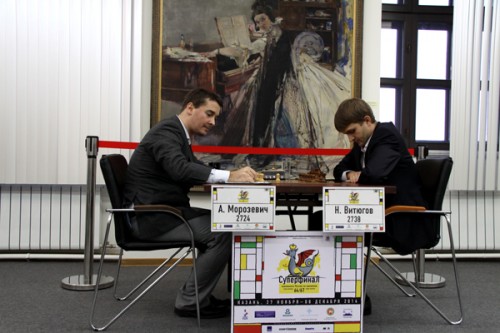 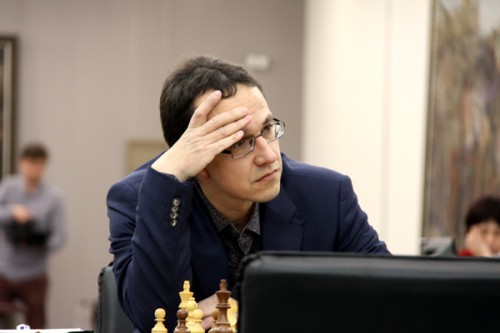