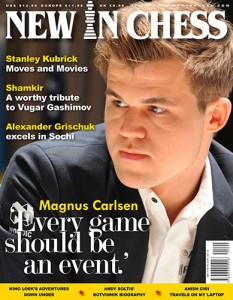 In New In Chess 2014#4 Magnus Carlsen speaks out about losing 2 games in a row, how it feels to be treated like royalty and why, in a friendly soccer game, he torpedoed a 73-year-old chess arbiter.
Our triple world champion Magnus Carlsen is always ready: ,,I feel every tournament should be an event, it should be something I look forward to”, Carlsen says in an interview for New In Chess magazine. When he is playing, he is not calculating what score he might need to reach a 2900 ELO-rating. He simply wants to win all his games.  When Carlsen​ played in Azerbaijan, the World Champion felt very strong after he won his first two games: ,,It just seemed to me that there was no reason to give up half a point in any game.”
Even after Carlsen surprisingly lost two games in a row, against Caruana and Radjabov, it didn’t shake his confidence. A win in the next round, inspired him to contemplate a strong finish: ,,I thought: why not score five from five in the second half instead? (…) The plan is just to play well, win all my games. I mean, that is never, at least probably, going to work out ever, but I think it’s not a bad mind-set.”
Quite often, the game of Carlsen is the longest game of the round. During the tournament in Azerbaijan, Carlsen was pushing in his second game against Radjabov. He kept going till far into the endgame, hoping to get his revenge. ,,My thought process is basically that I will be able to agree a draw in such positions when I am 40 or 50, but that right now I should try and find every little chance of winning. And as long as there is no risk and a two percent chance of winning, I think it’s worth the two hours of extra effort.”
New In Chess 2014#4 furthermore has:
The full interview with Carlsen is available in New In Chess 2014#4. This issue has annotated games by Caruana, Grischuk, Giri, Radjabov, Heine Nielsen, Timman and many others.
You can order the magazine at www.newinchess.com or read it digitally in the New In Chess magazine app on your iPad or on your Android tablet.