After missing the podium in the Rapid Championship, Magnus Carlsen played much better in the Blitz event, holding the top position from the very beginning and securing the gold medal with 17/21 points.

Half a point behind the winner is Jan-Krzysztof Duda (Poland), who has had a powerful run of 8 consecutive victories in the mid-tournament.

Magnus Carlsen said: “I am just relieved. Today was a very tough day. I was in front but being chased, and this is never easy. Yesterday the score was good, and the play was maybe not as great, but I feel I am usually best against the best players. Today I played very well and needed every single half point to win.”

Kateryna Lagno (Russia) maintained the good form from the first day of the Championship and emerged clear winner of the Women’s section with 13,5/17 points. This is her second gold medal, the first was won in 2010.

Sarasadat Khademalsharieh (Iran) took the silver medal with 13 points. Just like yesterday, she started the day with a loss, but then finished superbly with 4,5 points in the last five rounds.

Lei Tingjie (China) claimed the bronze medal with 12,5 points, despite the last round loss to her compatriot Tan Zhongyi. She was fortunate that the main competitor Valentina Gunina was also defeated. 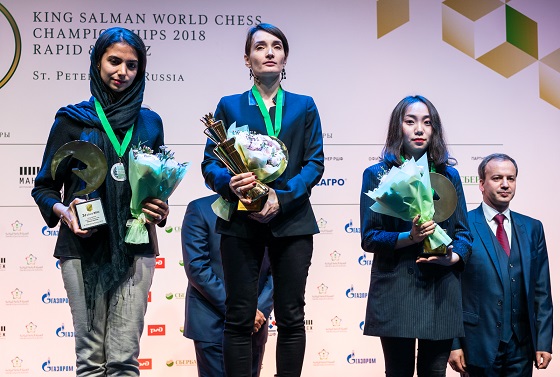 Kateryna Lagno stated: “I am very happy, of course. It is interesting that I didn’t lose a single game. Of course I was lucky in some games, but managed to hold them, and I think this is the first time in my life when I did not lose a single game in a blitz tournament.”