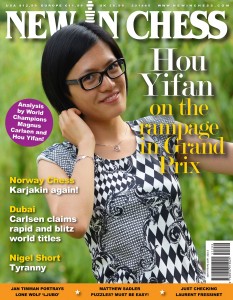 With three world titles in his pocket, Magnus Carlsen will confidently lead the Norwegian team in the Olympiad. Is he invincible? No, says Loek van Wely in his report about  the FIDE World Rapid & Blitz Championship in Dubai​ in ​the latest issue of New In Chess.
“Magnus does have a few weaknesses. First of all he is not blunderproof (see his game against Anand). However, he has the ability to bounce back; a loss makes him fight even harder the next game. Another weakness is that he gets bored sometimes. (…) And what he doesn’t like is when you attack him fiercely, go for his king for example, or play something very theoretical (…)”
Even endgames can be won against the champion, notes Van Wely. “Magnus is very strong in endgames. Once you have reached an endgame against Magnus, you have probably missed your chances before. However, the stats for the lucky few who manage to reach a better endgame against him are encouraging. There were three of them in 2013: Ivanchuk, Wang Hao and Caruana. All three of them got to a (drawish) rook endgame a pawn up and all three of them won!” Van Wely concludes, “Magnus is very tough and resilient. Not as resourceful as Hikaru, but then Hikaru needs it more than Magnus. And once he gets his chances, he is ruthless.”
In the 2014#5 issue of New In Chess magazine, Carlsen himself analyses both a rapid and a blitz game from the FIDE World Rapid & Blitz Championship.
In rapid Ernesto Inarkiev choose to play a Benoni with black. Not a wise choice. “Simen Agdestein taught me as a kid”, writes Carlsen, “that the Benoni is a bad opening and that the Sämisch is the best way to meet it.” In b​litz Carlsen faced 1.e4 e5 2.Nc3 Nc6 3.g3 with black against Rauf Mamedov. The Azeri had followed the example of Lu Shanglei and Topalov in other blitz games against Carlsen. “I’ve come to expect some sort of neo-Glek in every black game”, jokes Carlsen. He played 3…Bc5, and comments: “I knew …h5 was a possibility here or on the next move, with the idea to sac an exchange (Nf3; h4; Nxh4; Rxh4). I decided to save that for my next encounter with Bill Gates.”