Magnus Carlsen scored a second consecutive victory in the FIDE World Championship in Chennai to increase the lead to 4-2 after six games of play.

Sunday is the rest day, the second half of the match continues on Monday with Anand playing white pieces.

The defending champion Viswanathan Anand opened with 1.e4 and the challenger responded with the Berlin Ruy Lopez, which almost brought him success in the 4th game of the match.

Anand deviated from the early queens exchange and went for the more complicated 4.d3. He already used this line earlier this year to defeat Russian prodigy Sergey Karjakin.

On move 10 Anand played a novelty 10.Bg5, improving over his earlier encounter with Levon Aronian. The idea was to pin the black knight on f6 taking advantage of the fact that Carlsen’s dark-squared bishop is outside the pawn chain. 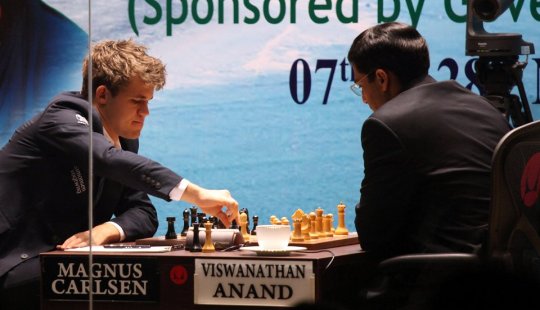 Carlsen responded with trading the light-squared bishops and then regrouping the knight from c6 to d7, like in Breyer Ruy Lopez, to reinforce the Nf6 and break the pin.

White maneuvered his knights to get hold of the central light squares d5 and d5, while black cleared the a-file and stood by for the possible d6-d5 break.

In a somewhat surprising turn of events, Anand traded all minor peaces and entered the endgame with three pairs of heavy pieces. The position looked equal, but Carlsen found a way to compromise white’s structure with c5-c4 advance.

White was left with doubled isolated pawns on the e-file, raising the comments that Carlsen will have another long endgame where he can gradually press for victory.

Instead of slowly suffering in the slightly inferior position, Anand decided to drop one of the pawns, trade the queens, and transpose into a rook endgame where he would have active play as compensation for the pawn.

There was also unanimous verdict that the endgame should be drawn, but Carlsen kept posing problems to his opponent. He gave up the queenside pawns in order to force the way for the passer on the f-file.

In the critical moment Anand made a pair of inaccurate moves. Carlsen jumped on the opportunity and sealed the victory to take the 4-2 lead.

Magnus Carlsen commented: “I thought I got a solid position out of the opening. Then at some point I was little bit better. But nothing much going on. He sacrificed or blundered a pawn. After that I got a good rook ending. I am not at all sure if it is winning. At this point I missed the whole h5 idea, I didnt think you can really give up a pawn like that. May be I should play 43…h5 (instead of 43…Kf7) and press for a win eventually with Re7-e5. Now, it was a draw. I had one little trap, which was my Kf4-Ke3 etc. Fortunately he went for it. It is very difficult, maybe impossible to hold after that.”

“Today is a heavy blow, I won’t pretend otherwise,” Anand admitted at the press conference, “Magnus pretty much summed it up well. It is here that I gave this check (57.Rg8+) and I thought it will go Rg4 and similar idea. But I just blundered into f4. And here 57.Rc8 is just a draw,” he added.

About the opening Anand said: “Magnus’ manoeuvre with the knight was quite good. Then I started wondering what to do. Then I thought with Qg4 with the major pieces I could get a solid position. Then I don’t know … one mistake after the other.”