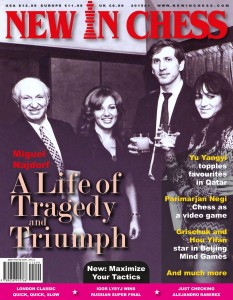 New In Chess magazine has started a new instructional series with Indian GM Parimarjan Negi. In issue 2015#1 he tours chess history and summarises the style of World Champion Magnus Carlsen:

,,Carlsen is a psychologist”, writes Negi. ,,He understands a secret of chess – that sometimes, however well you play and calculate, if a freak, brilliant tactic ruins your position, you’re dead. So he’s always in control – he’ll first prevent your counterplay, and then go about improving his position. Of course, when he’s pushed against the wall, particularly with black, he can just as easily enter unexpected complications, but no more than he needs to. He doesn’t try to play the best move in the position, but the best move against the opponent. At the same time, he does whatever needs to be done – never getting hung on to emotional aspects of the position such as its aesthetics, or how the position was two moves back.”

Negi explains how you can improve your own game by trying to understand the playing styles of great players like Carlsen and other world champions. Furthermore New In Chess has:

The digital edition of New In Chess 2015#1 is for sale in iTunes and the Google Play Store.