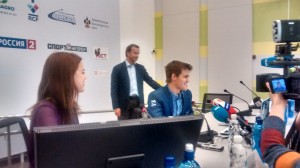 Relieved Carlsen at the press conference

Magnus Carlsen is FIDE World Chess Champion 2014! He retained the title after defeating the challenger Viswanathan Anand 6,5 – 4,5 in a match played at the Winter Olympic City of Sochi.

Carlsen took the lead in game 2, with Anand immediately returning the blow in game 3. The Norwegian took the lead again in game 6 and managed to hold all difficulties in further games, in what turned out to be one of the most exciting matches of the century.

Vishy went “all-in” in game 11, but he did not find the precise continuation in a better position. The game went from won to lost, Magnus Carlsen took the full point and with it the title World Chess Champion 2014. (final standings and statistics)