The opening ceremony of the FIDE World Cup took place at the Funicular restaurant in Tbilisi on 2nd September 2017.

The players and guests were greeted by the Minister of Sport and Youth Affairs of Georgia Tariel Khechikashvili, the ECU President Zurab Azmaiparashvili, the President of Georgian Chess Federation George Giorgadze and the FIDE Deputy President Georgios Makropoulos.

The Minister of Sport and Youth Affairs of Georgia Tariel Khechikashvili welcomed all the guests to Tbilisi:

For the first time our country holds a tournament of such a high category, and Georgian chess players are deservedly proud of their past. Georgia chess faces a big challenge as there will be the World Chess Olympiad in 2018 in Batumi. We hope that everything will be held at the highest level. I wish all participants successful games.” 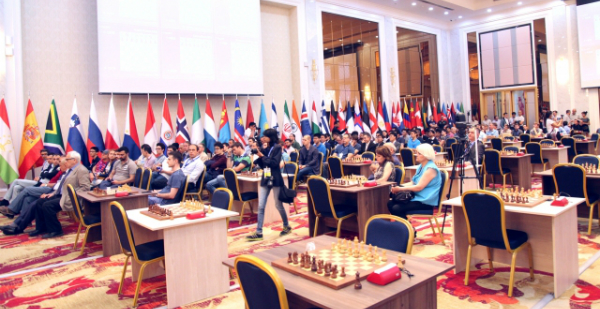 “The FIDE World Cup 2017 is going to be an historical chess event as it is the toughest event we have in FIDE. The participation of 15 top rated players, including the exceptional case of the World Champion himself, makes this event the strongest in history.

In order to win such tournament you should be a good player, have a good form and be a great fighter. Nobody can be sure about his own result here and this is why I really admire the decision of the World champion Magnus Carlsen to participate in this tournament. He writes his own history and he shows how the champion should be. I thank him for playing here and for the promotion of chess and this important FIDE event.

Georgia is a great country with a huge chess history, especially because of their great women players with some of them being here with us today. I would like to thank the Minister of Sport of Georgia Tariel Khechikashvili for his support, ECU President Zurab Azmaiparashvili, the President of Georgian Chess Federation Giorgiy Georgadze and his people for the organization of the World Cup and the coming Olympiad.

Recently there were some political statements in media that could have hurt Georgian people. On behalf of FIDE I would like to apologise for this. We are one family in FIDE because we do not allow our chess community to be divided for political, religious or racial reasons. I would like to ensure Mr. Minister that we will continue keeping to this principle.“

At the end of the speech Mr. Makropoulos declared the World Cup Open.

The opening ceremony included dance and song performances by the Georgian national ballet “Sukhishvili” and musical band “Ursa” and was enjoyed by the participants and guests of the tournament.

Chief Arbiter Delega then proceeded with the drawing of colors. He invited the top seed of the tournament, the World Champion Magnus Carlsen from Norway to pick one of the traditional Georgian wine vessel ‘Kvevri’. Magnus Carlsen will play the first game of the match against Oluwafemi Balogun from Nigeria with the white pieces.

After the end of the opening ceremony all the players came back to the official hotel and attended the technical meeting.

The organizers are FIDE, the Ministry of Sport and Youth Affairs of Georgia, the Check In Georgia Sports, the Georgian Chess Federation, Organising Committee of The 2018 World Chess Olympiad and Tbilisi City Hall. The title Sponsor is SOCAR.