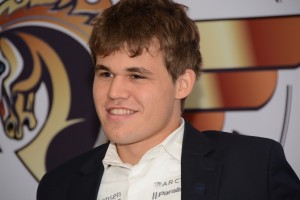 World Champion Magnus Carlsen posted on his Facebook page an interesting proposal for the changes in the World Chess Championship cycle.

In essence, he advocates return to the annual knock-out Championship, similar to the current World Chess Cup, and to the cycle that was empoyed in the period 1999-2004.

In advance of travelling to the US to prepare for the Sinquefield Cup, I felt it important to share with you something I have been thinking about a great deal: the World Championship cycle format.

I want to preface what I’m about to say with the notion that I have great respect and reverence for all the World Champions that have come before me, and for those that have contributed to the professionalization of chess. The Chennai match against V. Anand and our subsequent match in Sochi were both equally powerful and wonderful experiences. I was amazed by the intensity of the match format, as well as the massive interest from both the media and the public. I know people are working diligently to organize the 2014-2016 World Championship cycle, and I very much look forward to the match in November 2016 against the winner of the spring 2016 Candidates tournament.

Despite this, I have, for a long time believed – and voiced publicly – that there should be a new World Championship cycle system, which is both balanced and fair. Those of you who have followed top level chess closely for years will remember that I openly raised the issue of the privileges held by the World Champion on several occasions, prior to qualifying for the match in 2013.

In short, I strongly believe the chess world should evolve to a more just system. What does that look like? I have long thought that moving to an annual knock-out event, similar to the World Cup, would be more equitable. This change would in effect improve the odds of becoming World Champion for nearly every chess player, with the exception of the reigning World Champion, and potentially a few other top players who would no longer be favoured by the current format. Creating regional qualifying events combined with rating spots, the participation of all the top players in the world and the undisputed World Championship title at stake, I truly believe this would make the World Championship cycle more accessible to everyone.

What are your thoughts? Do you agree that the Chess World Championship cycle would benefit from a new system?