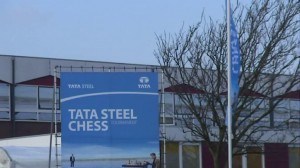 Reigning World Chess Champion Magnus Carlsen will take on some of his biggest competitors at the 77th Tata Steel Chess Tournament from 9-25 January, 2015.

Current world number two and rising star of the chess world Fabiano Caruana, and winner of the 2014 Tata Steel Chess Tournament Levon Aronian will both play at the tournament.

They will be joined by Women’s World Chess Champion Hou Yifan and Dutch players Anish Giri and Loek van Wely.

The tournament will take place in its traditional location of Wijk aan Zee, but will also visit other prestigious Dutch venues with satellite events in Rotterdam and The Hague.

On 15 January the 5th round of the Tata Steel Masters will take place in De Rotterdam, the recently opened eye-catching building at the waterfront of the River Meuse in Rotterdam, designed by renowned architect Rem Koolhaas.

And on 21 January, the 10th round of the Tata Steel Masters will take place in the recently renovated press centre Nieuwspoort in The Hague.

The Tata Steel Chess Tournament is one of the most important events in the chess calendar. The tournament brings together the world’s leading chess players and the most passionate amateurs with its grandmaster groups and amateur events.

The world-famous tournament has two main player groups, each with 14 players. They are known as the Tata Steel Masters and the Tata Steel Challengers. Both groups attract world class players and online spectators from across the globe.

Euwe Tournament Round 5
In round 5, Fridrik Ólafsson and Paul van der Sterren won their respective games, resulting in a ranking whereby all players in group 1 ...

Michal Krasenkow repeats success in Vlissingen
The 20th Hogeschool Zeeland Chess Tournament took place on 2-9th August at the University of Applied Sciences in Vlissingen, Netherlands. The 9-round Swiss Open was ...