Participants of different ages, professionals, amateurs, around 80 Grandmasters and 70 International masters marked the Championship one of the strongest and most numerous ever. 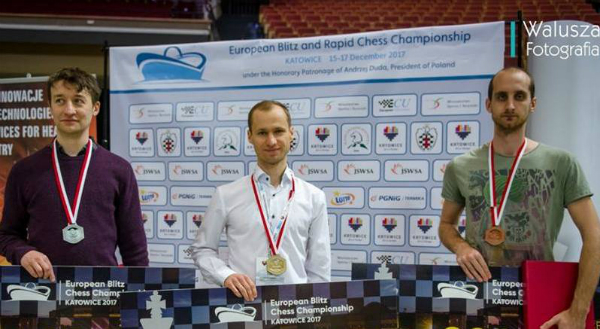 At the Closing Ceremony, where the European Chess Union was represented by the President Mr. Zurab Azmaiparashvili and the Treasurer Mr. Martin Huba, among the rewarded players were also best Juniors, Seniors and the best female player – Olga Zimina (ITA, 2299 Blitz rtg) who achieved 15 points and 82nd place.

European Rapid Championship took place on 16th and 17th December at the same place. IM Vavulin Maksim (RUS, 2485 Rapid rtg) made a big surprise by coming on the top with 6 victories in a row in the last 6 rounds!

In the closing round, Russian player defeated Duda Jan-Krzystof (POL, 2678 Rapid rtg) to take over the throne and to be crowned as the European Rapid Chess Champion for 2017! 5 players tied for the second place, all with the same score of 9.5 points, but according to additional criteria, silver went to Duda Jan Krzystof, while Ponkratov Pavel finished third. 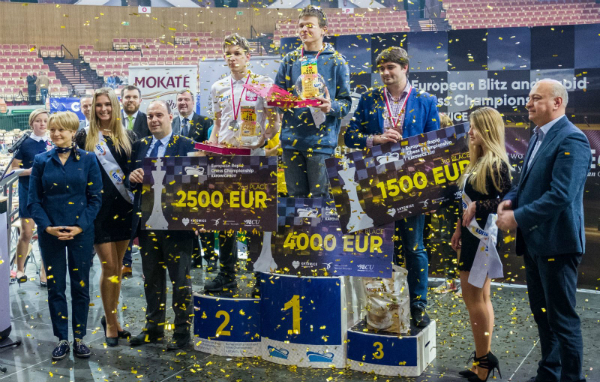 Zimina Olga (ITA, 2376 Rapid rtg) was crowned as the best female player also in the Rapid competition, where she scored 8 points and took 75th place.

The president of the Polish Chess Federation, Mr. Adam Dzwonkowski addressed all the present at the Closing Ceremony and the Championship was declared closed.