With only two rounds left to go, Malakhit and SPb Chess Fed lead the standings with 9 match points each. The team from St. Petersburg has an edge on the individual games count as they add 19.5 points, while Malakhit has 18.5.

SPb Chess Fed faced the other leader from last round, Yugra, at the first tables. Their victory came thanks to a win by GM Zahar Efimenko over the experienced Russian GM Aleksey Dreev. The rest of the games finished in draws before the time control.

First seeded Malakhit continues demonstrating their strength, they beat Kazan 4-2 in the fifth round. Alexander Grischuk used the black pieces to beat Artyom Timofeev, while Alexander Riazantsev won his game against the lower rated Ramil Hasangantin.

Yugra and SHSM “Nashe Nasledie” Moskow lead the women’s tournament with one round to go. 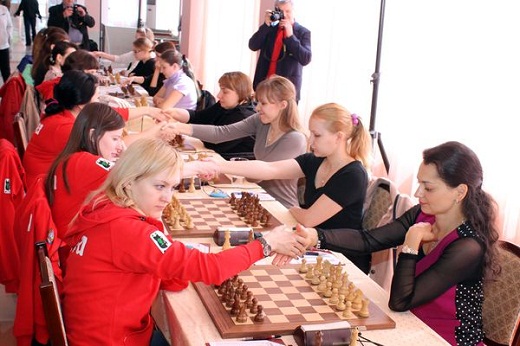