Viswanathan Anand didn’t get advantage from the opening against Vladimir Kramnik and the game was quickly drawn, but the Indian retained the lead after round 4 of FIDE World Candidates Tournament. 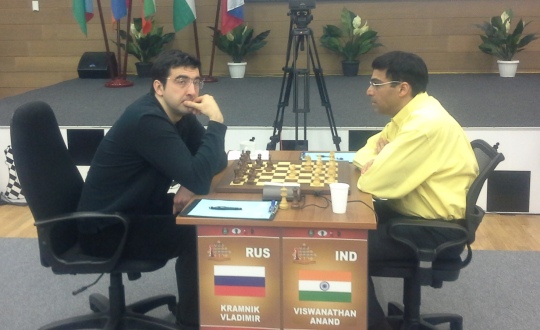 Kramnik defended with the Vienna Queen’s Gambit, which came as a surprise for Anand. Anand said he didn’t expect this line, particularly since he himself payed it against Kramnik (in 2003).

After black has infiltrated behind the opponent’s ranks with the excellent 18…Qh2, the play became more forced. Black’s inspired defence finally brought him reward when he caught the white king in perpetual check.

At the press conference Anand said that he was prepared up until 17.Qd2. He added that 18.Rd3 was forced and suggested that maybe 21.Nb3 was a better try.

Kramnik didn’t want to discuss his preparation, he just said that after 4.Nc3 he plays many different moves, 4…Be7, 4…Bb4, 4…c5, and now obviously 4…dxc4. Previously he entered Vienna with black in a game against Grischuk three years ago.

The players didn’t want to speculate on which score would be sufficient for the first place (+4 or +5). Kramnik said that the only sufficient score is to actually be just one step ahead of the rest of the field. 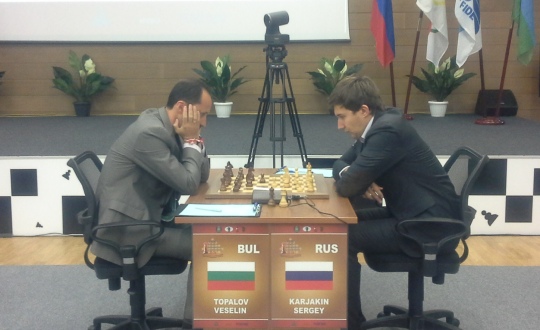 Sergey Karjakin started the round with 1.c4, which was only fourth such occasion from almost 1000 games with white. Veselin Topalov thought for a couple of minutes before responding with his favourite Reversed Dragon setup.

Later in the game, black played the relatively rare 10…Re8 and then traded the knights on d5. White briefly contemplated the position and decided to double the rooks on the c-file.

In a matter of couple of moves all minor pieces were exchanged. White decided to launch the usual minority attack on the queenside, to which black responded by giving two rooks for a queen and a pawn to unbalance the position.

Karjakin tried to redeploy his rooks to the open e-file, but Topalov was able to take advantage of the weakened light squares and deliver perpetual check.

At the press conference Karjakin noted that it is curious that he also plays Reversed Dragon with black pieces. He was unhappy about 14.Rc3, after which he didn’t have advantage. Topalov added that no matter what white does instead of Rc3, he would still continue with the same plan as in the game.

After 21.e3 Qf6 Karjakin could not find anything convincing. Topalov said that 22…Qg6 was a strong threat. He suggested maybe to delay a4 for one move and play 26.Rb3 first, but it shouldn’t change the overall evaluation of the game. 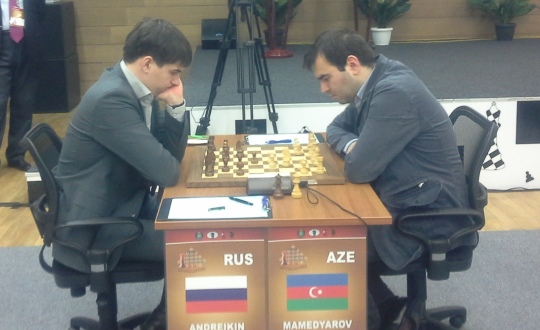 Shakhriyar Mamedyarov reversed the negative trend by defeating Dmitry Andreikin to leap ahead of the Russian player in the standings.

For third time in four rounds Mamedyarov faced with the Slav Defence. His start was modest, having moved e3 and a3, but soon-after he opened the center with e3-e4. Black naturally struck back with c6-c5.

White got some pressure after damaging black’s kingside structure and pushing b4. From that point on black experienced problems with the weakened light squares and advanced passer on c6.

White’s advantage was slowly increasing until he had missed the very strong 34.Qd6 and instead gave a check, because as Mamedyarov admitted, “when you are in time trouble you try to find some cheap tricks”.

After 35…f5 white realized that the win might be slipping away from his hands. But Andreikin quickly returned the favour with the weak 37…Kf7 (instead of the correct 37…Kh7 38. Qd6 Qa6).

Mamedyarov soon wrapped up the game. 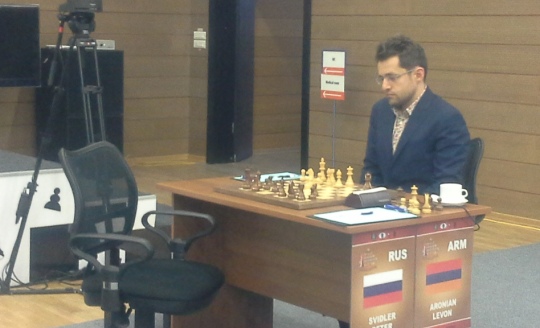 Levon Aronian and Peter Svidler did their homework and quickly banged the first 20 moves in one of the lines of the Gruenfeld Indian defence. Svidler prepared a novelty 21…Qa3 instead of the previously played 21…Qa6, which according to him loses by force.

Svidler spent some time to consider 27…Nxd4 and thought that this forced line would lead to a draw. He preferred to fight on and deviated from this move, which was a decision that he regretted later in the game.

The endgame was quite unpleasant and black could only prolong the suffering until move 57.