The sixth round of the Bejing Grand Prix finished with a big change at the top of the standings. Shakhriyar Mamedyarov defeated sole leader Sergey Karjakin in a very long game to catch him in first place. Alexander Grischuk, who was half a point behind Karjakin drew and is also sharing first with 4/6 points.

The most interesting game of the day, however, was Morozevich’s win over Gata Kamsky. The American is not having a good event and fell against his colleague’s creative effort. Wang Yue defeated Wang Hao in the local clash. The current national champion played with white and used his trademark positional style to defeat his compatriot in a very instructive endgame.

Current rapid world champion Shakhriyar Mamedyarov decided to use the Petroff Defense in his game against the leader Sergey Karjakin. The Russian, once again, showed his intentions to break this defensive effort with dynamic play, but had to face a very well prepared opponent. Karjakin was not able to get anything out of the opening, pushed too hard and ended up in an inferior position.

When the queens were exchanged on move 26, Mamedyarov was a pawn up in a knight + rook vs bishop + rook endgame. The Azerbaijani had the chance to play for two results but had to be very patient to convert this rather small advantage. Karjakin defended resourcefully but erred on move 65. It took Mamedyarov thirty more moves to take advantage of this mistake. The score-sheets were signed after 95 moves. 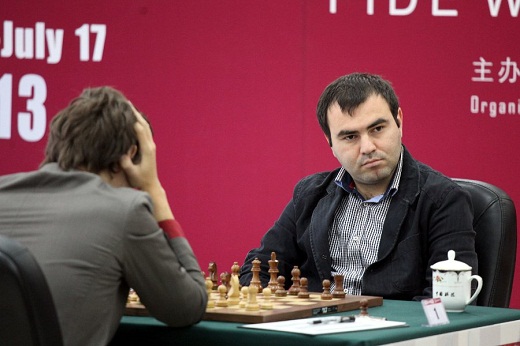 Alexander Morozevich played a very interesting line of the Queen’s Gambit Accepted to get a full point in his game against Gata Kamsky. The Russian is now on +1 half a point behind the leaders, sharing second place with three other contenders. On the other hand, Kamsky is now alone in last place with 1/6 points.

In the game, Morozevich decided to castle queenside, giving his opponent the chance to attack him directly with the help of his strong fianchettoed bishop on g7. Kamsky went all-in for the attack, giving up a pawn in the middlegame. Morozevich’s accurate defense and his strong passed pawn on the c-file were enough to get the point after 38 moves. 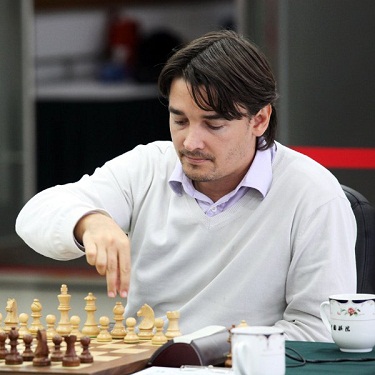 Wang Yue used his favorite Catalan to defeat his strong compatriot Wang Hao. The latter is now the best rated player in China and Wang Yue wants to recover this spot, which he owned a couple of years ago. This victory proves that he is still an elite player capable of defeating strong opposition. He is also half a point the leaders and will face Alexander Grischuk in tomorrow’s round.

The pieces were exchanged rather quickly in the game. Wang Yue decided to go for a very slight superior endgame thanks to his superior pawn structure. Wang Hao’s only weakness was the fact that he had doubled pawn on the e-file and white had to maneuver extensively to prove that it was enough to get the victory. When Wang Yue’s rook got to the seventh file, his rival decided to give up. 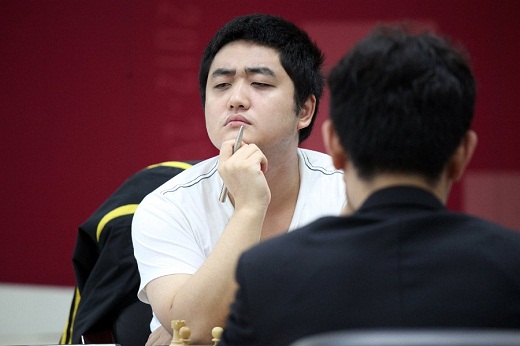 Alexander Grischuk used the Berlin Defense against Veselin Topalov. The ex-world champion got the usual edge but was only able to get a 3v2 rook endgame with pawns in the same flank. It did not take long for the Russian to demonstrate that this is a theoretical draw.

Vassily Ivanchuk could not take advantage of the small edge he got in the opening against Anish Giri, while Boris Gelfand and Peter Leko simplified quickly to a draw. 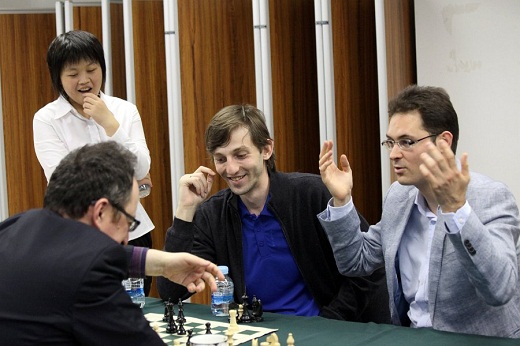