Two draws in the main games of the last round at the Beijing Grand Prix allowed Shakhriyar Mamedyarov to keep the lead and take home the winner’s trophy. The Azerbaijani could not defeat World Championship challenger Boris Gelfand, while his main rival Alexander Grischuk also hit a brick wall against the solid Peter Leko. Mamedyarov finished on +3 after getting five victories and two defeats throughout the event.

The final round saw two decisive results: Wang Hao obtained his second victory of the event over Gata Kamsky and Veselin Topalov defeated Alexander Morozevich, both games favored the player with white. Topalov’s victory is relevant because it allowed him to keep first place at the overall standings of the Grand Prix.

During the last round, all eyes were set on the games that would decide the eventual champion. Both Mamedyarov and Grischuk had very hard tasks ahead, given the solidity of the players they were facing. Boris Gelfand avoided the main lines and tried to create some play with a kind of Benoni against the Azerbaijani, but when white started to simplify the position, the draw became the most likely outcome.

The battle between Grischuk and Peter Leko did not even quite left the opening stage. The Hungarian closed the position with a quick c4 in a Nimzo-Indian and Grischuk did not push too hard against his rival’s great opening preparation. They started repeating the position on move 17. Leko finished as the only undefeated player, and his only win over Karjakin was enough to share 3rd-4th place with Veselin Topalov. 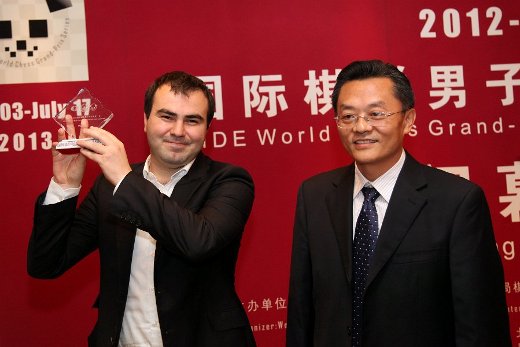 Wang Hao finished his event at home with an important win over Gata Kamsky. The Chinese got an overall score of -1, while the American remained on the cellar of the standings on -4. This disastrous event for Kamsky cost him 22 rating points and six positions in the live ratings list.

Kamsky deviated from his usual Slav Defense and went for a more adventurous opening with a fianchettoed bishop on b7. His experiment did not prove successful as the Chinese already had an important advantage by move 24. Despite the fact that Wang Hao did not use his advantage the most efficient way, his position was overwhelming enough to get the full point with a kingside attack. 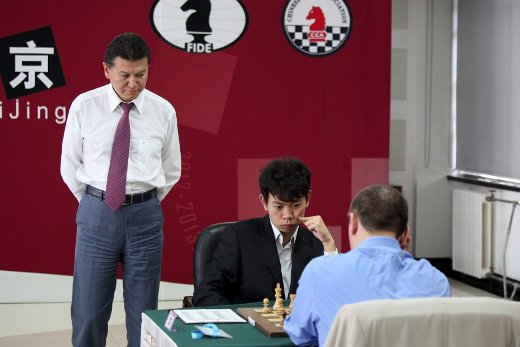 The other decisive game of the day saw Veselin Topalov using the white pieces to defeat Alexander Morozevich. The Bulgarian got his third good result after playing four events of the Grand Prix. He shared first in London, got a clear win in Zug and now shared 3rd-4th in Beijing. Meanwhile, Morozevich had a roller-coaster performance in China, signing three wins and three losses in the eleven rounds played.

Morozevich answered to white’s 1.e4 with a Pirc Defense. The pawn structure and general setup of the pieces soon started to resemble a Ruy Lopez, and the maneuvering battle began. Topalov gave up the bishop pair for activity and started to control the center. The Bulgarian used his initiative decisively, cramping black’s position very effectively. This eventually turned into a winning material advantage that forced Morozevich to resign on move 42. 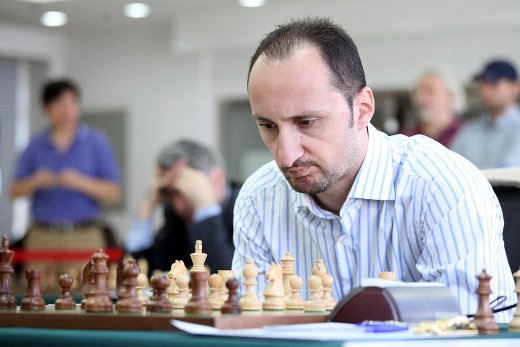 Both Ivanchuk – Karjakin and Wang Yue – Giri were long strategic battles that finished peacefully. Except Ivanchuk, all these players got an even score.

The final leg of the Grand Prix is set to begin on September 18th. We expect FIDE to announce the playing venue soon. 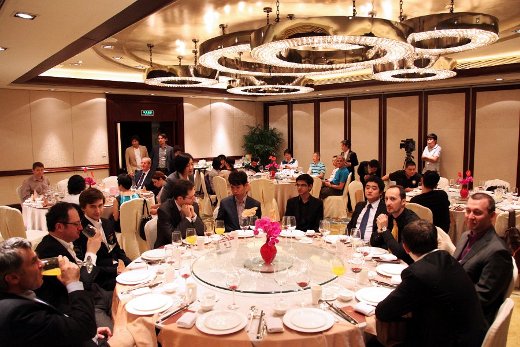 The players at the closing ceremony