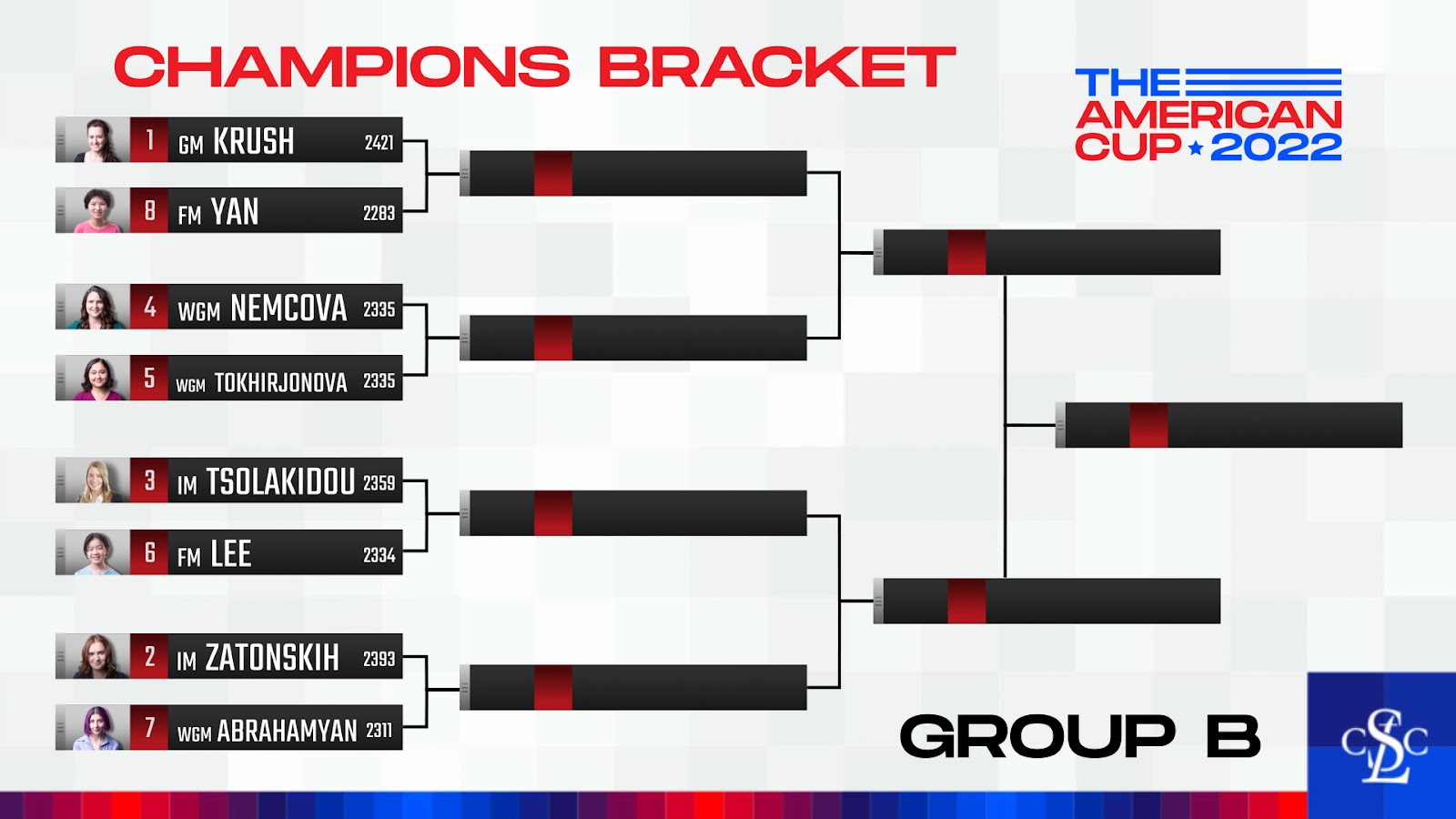 In this exciting new format, the winner of each match will advance to the next stage while the loser will be relegated to the Elimination Bracket, where they will be given a second chance to keep their tournament hopes alive.

Both GM Levon Aronian and GM Sam Sevian managed to win their first game in the Open Field, while the Women’s Field saw GM Irina Krush, WGM Begim Tokhirjonova, and IM Anna Zatonskih each scoring a decisive victory. With each match consisting of two games, So, Robson, Yan, Nemcova, and Abrahamyan will all be in a must-win situation tomorrow in order to force a rapid playoff.

Check out the full replay of live coverage from the day here. The time control for the event is 90 minutes plus 30 seconds increment for all games in the Champions Bracket, with a rapid time control of 25+10 for the Elimination Bracket and a 10+5 time control for all playoff matches.

The first game of the day to finish took place between GM Leinier Dominguez and GM Sam Shankland, as the players entered a highly theoretical variation of the Italian Game. Showing good preparation, Shankland sacrificed a piece for three pawns and was able to successfully neutralize Dominguez’s pressure, who then forced a draw by repetition.

Scoring a huge win with Black was GM Sam Sevian, who managed to overtake the initiative against GM Wesley So in a sharp position with opposite side castling.

Also winning was GM Levon Aronian, who gave up his strong fianchettoed bishop in order to snag a pawn against GM Ray Robson. Although Black had serious compensation, Robson was unable to generate enough play for the pawn and Aronian was eventually able to convert the full point.

The last game to finish was a wild affair between GM Fabiano Caruana and GM Jeffery Xiong, as a quiet Petroff quickly turned into an unbalanced queen vs. two rooks middlegame, with both players missing chances as they approached mutual time trouble. With Black’s king too open for the rooks to create serious counterplay, the game was logically drawn by repetition, keeping the match level going into tomorrow’s round.

In the Women’s Field, top seed GM Irina Krush earned a smooth win against FM Ruiyang Yan, nursing an extra pawn out of the opening to eventually take over the full board. No. 2 seed IM Anna Zatonskih also won her game, building up a large strategic advantage against WGM Tatev Abrahamyan, who later blundered in time trouble while in a difficult position.

Winning with Black was WGM Begim Tokhirjonova, who outplayed WGM Katerina Nemcova out of the opening in order to pick up a clean extra pawn. Although Nemcova had chances to hold in an endgame with opposite colored bishops, a further blunder allowed Tokhirjonova to secure the victory.

The final game to finish was a rollercoaster draw between IM Stavroula Tsolakidou and WIM Alice Lee. Although Lee held a big advantage out of the opening with an overwhelming majority on the queenside, a timely knight sacrifice allowed Tsolakidou to turn things around with a powerful kingside attack. Amazingly, Lee managed to survive and eventually escape into an endgame with a knight against four pawns, where Tsolakidou was unable to generate any real winning chances.

Day 2 of the 2022 American Cup will take place Thursday, April 21 starting at 12:50 PM CT. Catch all the action live with grandmaster commentators Yasser Seirawan, Cristian Chirila, and Alejandro Ramirez on uschesschamps.com and on the Saint Louis Chess Club’s YouTube and Twitch.tv channels.