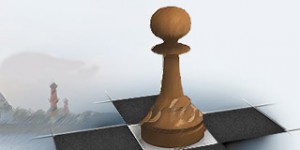 The strong Botvinnik Memorial in St. Petersburg, with the participation of more than 40 GMs and 70 titled players, is off to an exciting start in Russia. In the first round all but 7 from 111 games finished with decisive results.
Most of the favorites including GM Tiviakov, GM Areshchenko, GM Inarkiev, GM Grygorian, GM Alekseev, GM Zvjaginsev, GM Matlakov, GM Timofeev, GM Khismatullin, GM Khairullin, GM Lysyj, GM Khalifman, GM Andriasian, GM Ponkratov, etc, won their first round games. One of the few surprises was the draw of GM Hovhannisyan against Artemiy Puraev, and the draw of GM Dvoirys against Pyotr Pen.

The 2012 edition of the International chess festival M.Botvinnik Memorial takes place August 25 – September 2 in St. Petersburg, Russia. The classical tournament is a stage of the Russian Cup and a week before the start includes more than 40 Grandmasters.

The time control of the tournament is 90 minutes for 40 moves, 30 seconds increment per move from move 1. Players who are late for the game for 30 minutes get loss by default. No draw offer can be made before move 41. A total of 9 round Swiss system will be played, valid for FIDE rating and international norms. The venue of the M. Botvinnik Memorial is hotel “Park” (metro station “Krestovsky ostrov”, Severnaya doroga 12, St. Petersburg, Russia).