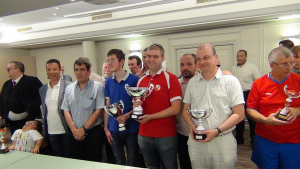 The 9th and last round of this European Chess Championship for Blind and Visually impaired players took place on Sunday 2nd August at the Mercure Hotel, rue de Bonnel in Lyon. The closing ceremony was just after at 17:00.

This last round, like the first one, saw an extreme fighting spirit because there was only one draw in the top 12 boards!

The logic was respected because it’s the Elo #1, the Polish Grandmaster Marcin TAZBIR, who becomes the new European champion, thanks to an ultimate win over the Serbian DIMIC. He finished sole first, unbeaten with 7.5/9.

On board 2 the Russian Stanislav BABARYKIN and the German Oliver MUELLER engaged in a merciless fight of almost six hours, which ended in a draw. They complement the podium in that order.

The English Chris ROSS ponctuated his excellent championship by a new victory, over PRIBEANU, and finishes 4th with 6.5/9 (performance at 2334). On board 3 the word champion Jacek STACHANCZYK played a theorical piece sacrifice against the WIM Lubov ZSILTZOVA-LISENKO but his attack led to nothing and he was defeated.

Let us mention as well the good game of the French Adrien HERVAIS against the FM WASSIN (2298), in which the opposite color bishops endgame was draw before Adrien broke down in the end. However he played a superb tournament and ended best French player. The former European champion Piotr DUKACZEWSKI closed his course on a good note by overcoming GRIGORCHUK. Let us finally insist on the magnificent tournament of the Romanian junior Razvan NEDU, Elo 1551, performance at 1915.

All the organization team was thanked many times. This includes particularly the collaboration between the three chess clubs of Lyon whose presidents were named above, the DUTERTRE family, Mensour (Ibis Hotel), all the persons who guided the players (including Alison, Armin, Armand, Alain, Patrick, etc.), who helped for entering the games (including Philomène, Simon, Thomas, Nicolas), during the chess animations in Lyon, all the photographers, the translators (Otari family, Patrick, Bernard, Magdalena), Arthur for the Internet, Julien and Sylvain for the live games, commentated games and entering the games.