A friendly match between European champion 2016 Ernesto Inarkiev and World Vice-Champion 2012 Boris Gelfand will take place on June 12-22 in Magas, the capital of Ingushetia Republic.

The match will consist of six games with the following time control: 90 minutes for 40 moves, and them 30 minutes for the rest of the game, with 30 bonus second per each move, and six rapid games (15 minutes plus 10 seconds per move).

Winning a classical game gives 2 points, winning a rapid game gives just 1 point. The winner is the player with the best score after 12 games. 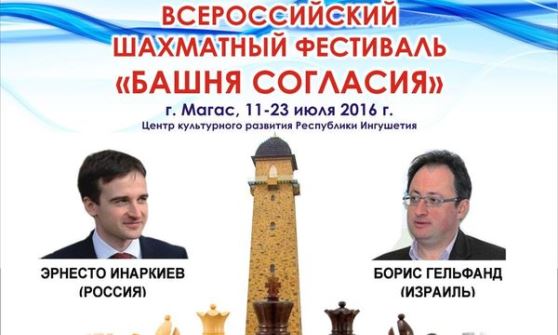 If the match is tied, the outcome will be determined in an Armageddon game with 5 minutes for White and 4 minutes for Black.

Alongside the match, a junior tournament Hopes of Northern Caucasus will be played. There will also be seminars for trainers and arbiters, simuls, and blitz tournaments.

The curator of the festival is Head of Ingushetia Yunus-bek Evkurov. Alikhan Kharsiev is the main sponsor. Alexander Kostiev, president of Moscow School Chess Federation, is the festival director. IA Artem Akhmetov is a chief arbiter, and trainer of Adi Akhmad club Timur Gadaborshev is the head organizer.

The organizers are expecting to see many honored guests, including FIDE President Kirsan Ilyumzhinov and RCF Executive Director Mark Glukhovsky.