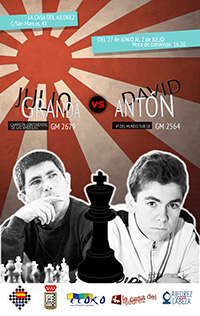 The match is being organized by the Chess Federations from Madrid and Spain, with the help of La Casa del Ajedrez, and the companies ECORO and Ajedrez con Cabeza.

Young David Anton is the great promise of chess in Spain. During 2012, he was declared Madrid Chess Champion, and his performance in strong international events cleared the way for him to get his grandmaster title. Now, fourth on the juniors’ world ranking, he will try to climb to the elite.

Peruvian Julio Granda is also enjoying great shape. His second consecutive victory at the Continental de las Américas and his great showings at tournaments from the Spanish circuit have put him near the 2700-Elo mark. His talent is completely evident and his experience in strong tournaments, vast.

The games will begin at 16:30h local time and will be broadcast live.