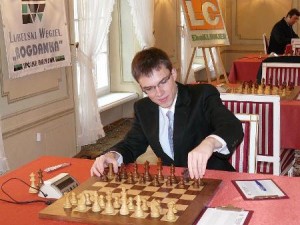 Reigning Polish champion GM Mateusz Bartel won the 2012 edition of Aeroflot Open that took place 7-15 February in Moscow. Bartel collected 6,5/9, the same points as Pavel Eljanov and Anton Korobov, but had better first tiebreak (more games with black) which puts him on first place in the final standings.

Bartel started with draws against Grzegorz Gajewski, Evgeny Tomashevsky, and Ray Robson, but quickly entered in strong rhythm defeating Ivan Popov, Krisnan Sasikiran, and Fabiano Caruana. Being close to the top, he secured the first place with solid draws against his direct opponents Eljanov and Korobov.

Replay all games from Aeroflot here

Read more about Bartel in a recent interview for Chessdom