At the end of the 6th round of the 4th Mayor’s Cup International Chess Tournament 2011 organised by Venus Chess Academy and co-sponsored by LIC, Indian International Master K Ranthakaran (2386) is leading with 6 points followed by GM Aleksandrov Aleksej (ELO 2618) of Belarus and GM Martyn Kravtsiv (ELO 2583) of Ukraine with 5.5 each.

The tournament is hosted by Goregaon Sports Club and conducted by Bombay Chess association.

IM K Rathnakaran (2386) played White pieces against IM Shyam Nikhil (ELO 2418) and opted for Maroczy Bind in the Sicilian Defense. Rathnakaran never allowed Shyam to move his Queen pawn by placing his rook in front of it. In the middle game he doubled his Rooks on the same file and with the help of Knight he captured it. Thus forcing Nikhil to resign in 28 moves, when further loss of material was imminent. 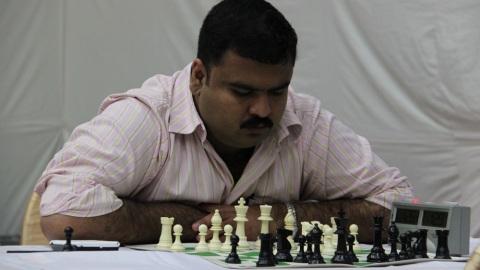 The game between GM Marat Dzhumaev (ELO 2492) of Uzbekistan and the top seed GM Aleksandrov Aleksej started in the Scotch Gambit. Black equalized early in the middle game. White tried to maintain the equal position by exchanging the Queen. However, few inaccurate moves of Marat gave his opponent chances. Aleksej won Rook for Knight on 29th move and thereafter forced Marat to resign on 30th move.

On the 3rd board GM Martyn Kravtsiv playing with White against GM Enamul Hossain (ELO 2481) of Bangladesh started with Modern defense which later converted into Philidor. The game was slightly better to Martyn in the opening but Enamul managed to get an equal position which he maintained till 47 moves. On 48th move instead of moving his knight Enamul moved his King away from the passed pawn and lost soon after.