At the end of the 8th round of the 4th Mayor’s Cup International Chess Tournament 2011, organised by Venus Chess Academy, co-sponsored by LIC and hosted by Goregaon Sports Club, top seeded Aleksandrov Aleksej (ELO 2618) of Belarus is leading with 7 points followed by six players with 6.5 points each.

With the exception of IM Prasanna Rao (ELO 2418) and IM Thejkumar M S (ELO 2450) all the games on the top boards ended in draws. 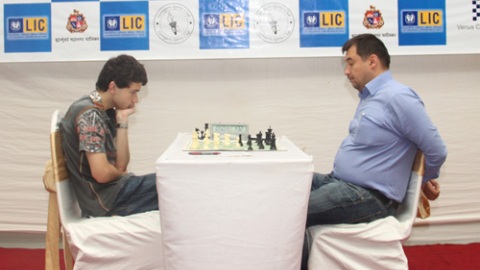 The attraction of the day was the game on the top board where both GM Aleksandrov Aleksej and GM Martyn Kravtsiv (ELO 2538) of Ukraine were fighting hard to take the lead. Aleksandrov opted for Ruy Lopez Berlin defense. The game was equally tense after the exchange of Queens. After 53 moves both settled for a draw.

The game between IM Prasanna Rao and IM Sahaj Grover (ELO 2514) was the only game which lasted for more than 4 hrs. Playing with black Sahaj opted for French defense. He castled on the queenside and started a solid attack of pawns on the Prasanna’s king. In the middle game Prasanna got a central passed pawn but it was captured by Sahaj with exchange of Rooks and gained a clear advantage but failed to capitalize on it.

In the end game with opposite coloured bishop the game was heading towards draw. But Prasanna sacrificed his Bishop for a passed pawn getting 2 passed pawns against the bishop and won in 76 moves. Now Prasanna needs another half point for a GM norm.

Whereas Ankit Rajpara (ELO 2281) made his IM norm irrespective of his result of the next round.