At the end of the 5th round of the 4th Mayor’s Cup International Chess Tournament 2011 organised by Venus Chess Academy and co-sponsored by LIC two Indian International Masters viz K Ranthakaran (2386) and P Shyam Nikhil (ELO 2418) are leading with 5 points followed by nine players with 4.5 points.

After exchanging the Queen’s on the 8th move Shyam started a strong attack on the kingside with his pawn, whereas black’s position was very cramped with all the pieces sitting inside even after first 15 moves.

Shyam played brilliantly getting two passed pawn on the king side in the middle game and converted it into win after 48 moves. 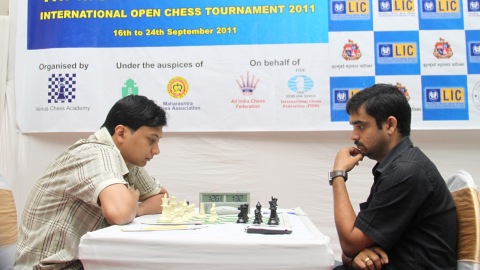 The game between IM K Rathnakaran and IM Himanshu Sharma (ELO 2421) started with Sicilian closed variation but later on converted to King’s Indian Attack. Playing with black Himanshu captured Bishop with his Knight and exposed his King. On 23rd move instead of attacking on the pawn with a Bishop he captured a pawn with a Knight.

Himanshu made a wrong move of the Bishop on 29th move which gave a passed pawn to Rathnakaran and thus accepted his defeat in 38 moves.