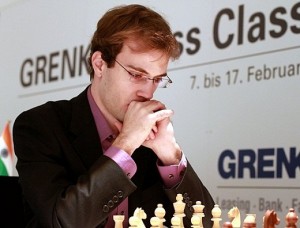 GM Georg Meier left the cellar of the standings by beating his direct rival GM Daniel Fridman. Fabiano Caruana still leads the tournament with 3 rounds to go. Viswanathan Anand and Arkadij Naiditsch follow him closely half point behind.

Today’s 7th round of the Grenke Chess Classic saw the strongest clash in terms of rating and expectation. The current leader Fabiano Caruana played against the World Champion Viswanathan Anand in a game that could have been decisive for the standings. It started with Vishy using the Sicilian to answer Fabiano’s 1.e4. As it’s already usual with these two players, they were extremely well prepared and didn’t spend much time in the opening. Caruana decided to castle kingside, so the middlegame became a positional battle. Caruana got a little initiative thanks to his space advantage, but the Indian’s defensive skills were enough to secure the draw. In the final position, the endgame does not give any player chances to look for a win. 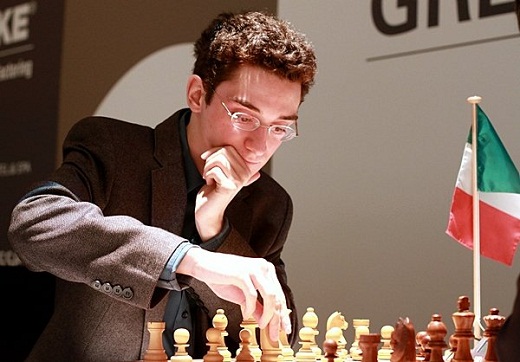 On the second board, another tense fight took place. The “man of the hour”, Arkadij Naiditsch, faced England’s Nr.1 Michael Adams. The German arrived to this round with a lot of momentum after the great win he got yesterday against Fridman. However, Naiditsch left his king in the center to activate his pieces and handed the advantage to Adams early in the game. Addms won a pawn in the late middlegame, but the activity of the black king plus the drawish nature of the rook endgame that arose were enough to secure a draw. 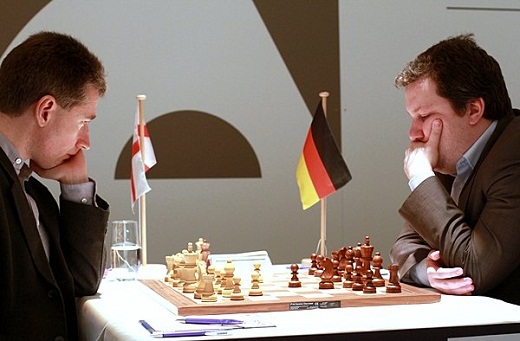 In the third game, the Germans Daniel Fridman and Georg Meier tried to take advantage of this “easy” game – at least compared to the other opponents – in order to climb in the standings. Both players were disappointed by their last round performance; Fridman lost to a sacrificial attack and Meier missed a win against the very strong Caruana.

The game heated up right before the time control. Georg Meier took the initiative, after winning a pawn on move 33, he converted his advantage in a rook + bishop vs rook + knight endgame.

This win leaves Fridman in the last place, while Meier now stands with a decent -1 score.