World #2 Levon Aronian headlined as the lead instructor for the 2014 Metropolitan & ACA Summer Chess Camp, held in Glendale, California from July 9th-13th. This was the first joint effort between Metropolitan Chess and American Chess Academy, a local educational organization based in Los Angeles.

As mentioned previously, the idea to invite Levon came from his personal relationship with Khachiyan (his childhood coach), as well as Matikozyan and Ambartsoumian, who he knew well from Armenia. For Levon, this was not only a chance to teach at a high-level chess camp, but a chance to visit the Armenian community in Glendale.

On July 7th, the city of Glendale held a special press conference honoring Levon, presenting him with the ceremonial “key to the city”. Levon definitely seemed like he enjoyed his stay in Los Angeles very much, relishing the opportunity to impart his wisdom and knowledge on the students and the chance to reconnect with many old friends.

The students were divided up into five separate groups by rating, each getting the chance to learn from a variety of coaches throughout the camp. Aronian spent every morning with the top group, rated 2000+, before cycling through the rest of the groups during the afternoon lecture sessions.

Levon is well known for his laid-back personality, which really became evident through in his teaching. He mostly went over his games, highlighting a few ideas in each encounter that were particularly pleasing or aesthetic to him. He focused on his feelings during a game, and encouraged students to use their intuition to help guide them in making decisions. 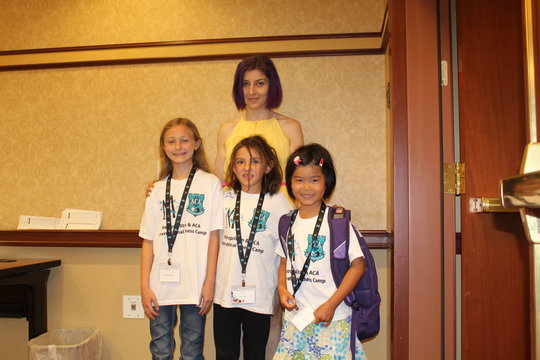 Although the top group had over a dozen masters, the star student was undoubtedly GM Kayden Troff, who had just won the 2014 U.S. Junior Championship. Kayden said, “I appreciated getting to see and talk to Aronian, he was very personable and just a lot of fun – along those lines – he was kind and joked around with us during the lessons, which was really cool.”

For NM Scott Treiman, “It was a little surreal when he would present games against the best players in the world”.

NM Craig Hilby was also quite captivated with Aronian’s instruction, saying “What I thought was most valuable was when he taught us about long-term sacrifices and about how there doesn’t have to be a concrete way to prove that the sacrifice is good for it to work.”

The camp was also suitable for beginning players, who got to work with the highly-efficient team of Jay Stallings and Jerry Yee, who have many years of coaching experience, teaching hundreds of students. Jay and Jerry did a good job of keeping things fun with various chess exercises, activities, games, and even mobile apps!

In addition, the students received visits from Levon, Dejan, and Tatev, who each gave sound advice on developing as a chess player and learning to love the game. Afterwards, they would be bombarded with requests for photos and autographs, to which they of course kindly obliged.

Apart from daily lectures, the students also played training games within each group, which were used not only for training purposes but also for a camp-wide tournament. The winner of each group would receive a special prize: the right to play a one-on-one blitz game with Levon! We also organized evening activities on each day of the camp, giving the students to socialize and have fun while playing chess. 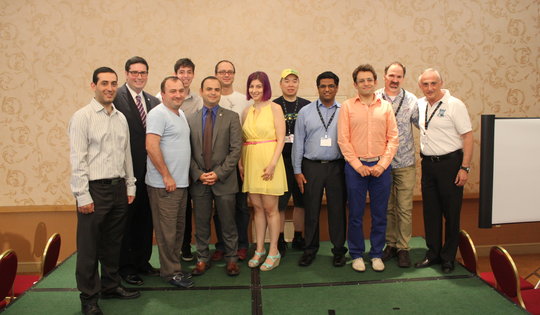 The instructors with Glendale’s Mayor and City Clerk

On Day 1 we held a blitz tournament, while on Day 2 GMs Bojkov and Khachiyan teamed up for a 40+ board clock simul, only losing three games! On Days 3 and 4 we held bughouse tournaments, a camp favorite. To each of the winners of the evening activities, we gave out a copy of Dejan Bojkov’s recently published book, Modernized: The King’s Indian Defense, which he personally signed for each winner.

The final day of the camp was a lot of fun. For the closing ceremony, we received a special visit from the Mayor of Glendale, Zareh Sinanyan, as well as Glendale City Clerk Ardashes Kassakhian.

After taking photos with the winners of each group tournament, Levon sat down to play several 5-minute blitz games against the first place finishers. He chose Black in every game and won handedly, but in true sportsmanlike fashion offered a quick post-mortem to teach opponent.

After the blitz games Levon also agreed to play a few bughouse games (his favorite pastime as well) against the winners of the bughouse tournaments. The players were surrounded by all 100 students and casually engaged in some good ol’fashioned trash talk! After many more photos and autograph requests (which Levon graciously completed), it was finally time to close out the camp. 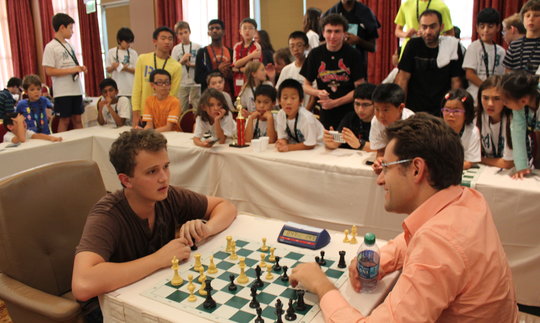 Overall the camp was a huge success, and it seems likely that Metropolitan Chess and American Chess Academy will team up for more events in the future. We hope Levon will return next year as well!