The Sparkassen Chess Meeting has taken a turn in today’s round. Michael Adams took sole lead thanks to a victory over Igor Khenkin. Vladimir Kramnik lost against his compatriot Dmitry Andreikin and now stands a whole point behind with two rounds to go. The other decisive result of the day was Arkadij Naiditsch’s win over Wang Hao.

The tournament now changed character. Kramnik will need to push hard in his game against Fabiano Caruana tomorrow if he wants to claim his eleventh title in Dortmund. Adams will play with black against Georg Meier and will need to face his direct rival on Sunday’s last round. The Englishman’s performance so far has been quite incredible and it seems hard for him to lose track in the last two rounds.

Adams took advantage of Khenkin’s small inaccuracies in a Caro-Kann. It is remarkable to see how he did not need his opponent to make a big mistake and only converted the positional edge he was given. After 31 moves, the experienced German grandmaster had to give up hopes.

Dmitry Andreikin played actively against Vladimir Kramnik. He quickly took over the initiative and gained an important space advantage. When the tactical phase finished, Andreikin was left with a dangerous passed d-pawn, which finally decided the game in his favor. 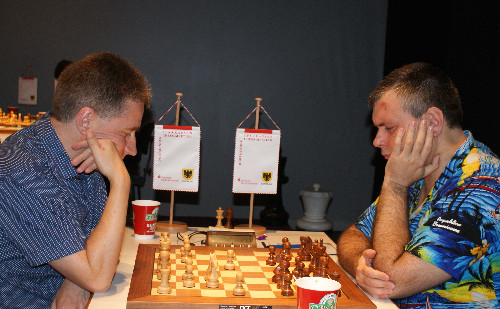