The great venue of the Alekhine Memorial in Paris is suitably accompanied by very exciting chess. Michael Adams won his second game in a row and established himself as the sole leader. The other two winners from yesterday’s round – Ding Liren and Vladimir Kramnik – lost today and fell to an even score. Maxime Vachier-Lagrave is in sole second place with 1.5 points.

After defeating World Champion Viswanathan Anand in the first round, Michael Adams had another tough challenge today, as he faced super-GM Peter Svidler, who just had a good performance at the Candidates Tournament. The Englishman played the system with d3 of the Spanish Opening, the same opening that Svidler used to beat Carlsen in London a couple of weeks ago.

During the complicated middlegame, Adams managed to win a pawn, while Svidler kept the bishop pair. However, Adam’s well-coordinated and centralized pair of knights ended up dominating black’s pieces. This factor, added to the extra pawn, pushed the Russian to resignation on move 37 – he decided not to suffer any longer in an inferior endgame against a great technician like Adams. 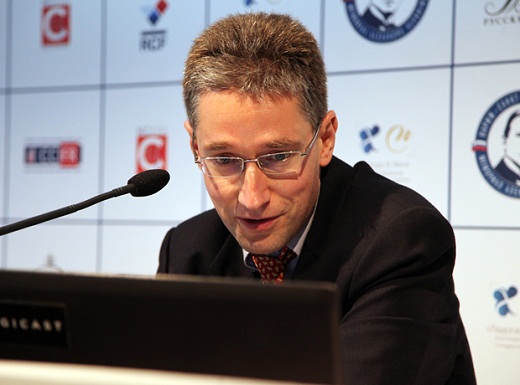 World’s number 3 Levon Aronian recovered from yesterday’s loss with a great victory against Vladimir Kramnik. The Armenian used his strong passed d-pawn very effectively to shackle Kramnik’s defenses in a queens and rooks endgame. The Russian became the big favorite in the tournament after his great positional victory against Nikita Vitiugov, but this result proved that he is not unbeatable, and that Aronian can never be ruled out as a candidate to win the event.

The young representative from China, Ding Liren, fell against Maxime Vachier-Lagrave in 39 moves. The Chinese chose the Caro-Kann Defense and Vachier-Lagrave responded with an active kingside expansion. The most important factor of the position was Ding’s kingside lack of development. It is remarkable how, in the final position, his bishop and rook are completely caged  in their initial squares. 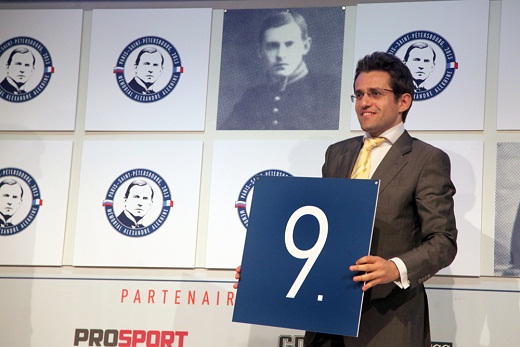 Levon Aronian during the drawing of lots

Laurent Fressinet and Boris Gelgand signed a rather quick draw. The triple repetition came on move 26 when Gelfand decided not to take any risks against a potential kingside attack.

Nikita Vitiugov and Vishwanathan Anand finished their game peacefully after both losing yesterday. The Indian went for the Nimzo-Indian Defense, a complicated early middle game followed, but the simplifications took the game to a draw. 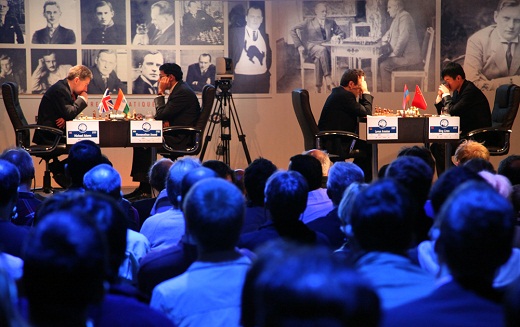 The event has attracted a lot of spectators