The 2013 edition of the Sparkassen Chess Meeting saw the comeback of a great player, England’s number one Michael Adams. He obtained clear first place thanks to a 7/9 score with a rating performance of 2925. The live ratings already have the Englishman in the twelfth position with 2761 points. This was Adam’s greatest tournament performance ever.

Second place went to ten times winner of this event Vladimir Kramnik. The Russian could have taken first place with a win over his direct rival in the last round. It is worth noting that these two players faced each other in the last rounds of both the 2012 London Chess Classic and the 2013 Alekhine Memorial. Kramnik, who needed to win, used the Sicilian but had to settle for a draw in no more than 14 moves, given the variation chosen by Adams, which forced the draw or left him with a superior position.

Kramnik’s performance was not bad at all, however. He obtained a 2866 rating performance and recovered the third position in the world ranking. Six out of his nine games finished decisively and his defeat against Adreikin was the key factor for him not taking his eleventh title. 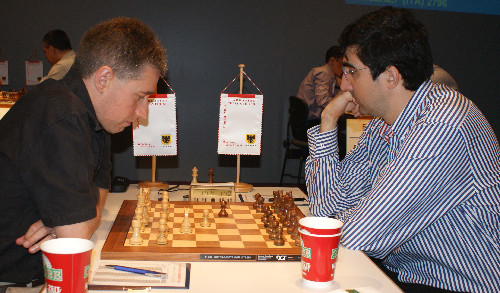 Peter Leko and Arkadij Naiditsch shared third place with an even score. This fact shows that the two first positioned players clearly dominated the tournament. Leko actually lost four rating points with his performance, while Naiditsch kept his 2710 rating.

Fabiano Caruana and Wang Hao had a rather disappointing tournament, where they lost some rating points due to losses against the nominally weaker German players.