In a thrilling last round, his crucial game against Olaf Berg was, fittingly, the last to finish, and the victory scored clinched him first place on tie-break, the winner’s cup and a spot in the next World Cup. Naturally, congratulations are in order to a deserved winner!

Already before the start of the round, Wiedenkeller was assured of first place if he would win his game; but against a strong opponent, the desired result was by no means predetermined. Additional pressure was put to him by the fact that he was tied with not just one, but two other players, and it was a safe bet that at least one of them would win his game (and overtake him in case of a draw). 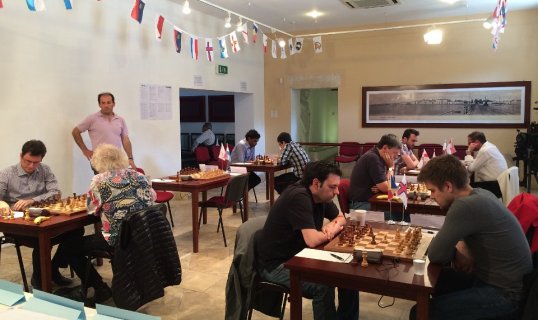 Igor Efimov was the most likely candidate, coming from a series of wins in the second part of the tournament and playing a theoretically weaker opponent (Tito Kahn). He did reach an unbalanced position from the opening, as per his plan, no doubt, and seized the initiative after his opponent misplayed the early middlegame.

A defiant attacking gesture made Kahn lose his cool, and he had to surrender material after his inferior reaction. To his credit, he did fight on for a long time afterwards, trying to pose as many problems as possible, but in the end he had to accept defeat. This outcome secured Efimov at least a tie for first place, and tournament victory if Wiedenkeller would not win his game.

In the end, this was not meant to happen, and Efimov paid the price for losing his game against the tournament winner: the players’ direct encounter was the first tie-break criterion.

Oscar De la Riva, who had been leading throughout, had to be content with third place after all. He slowly developed some play in his game against Fred Berend (who was also in contention for the medals and would have won one in case of a win – overtaking De la Riva) and seemed to have the advantage, but the Luxembourg IM did not budge and put up an excellent defense gradually extinguishing White’s pressure.

In the end, after missing a tricky defensive resource for his opponent, the Andorran even had to be a little careful; but it wasn’t that difficult, and the game petered out to a draw.

This result cost De la Riva some money and a few rating points, as well as one place in the rankings: had he won, he would have gotten the silver medal. As for Berend, he finished fourth, with Olaf Berg and the talented young Cypriot Andreas Kelires (who beat Peter Kirby) completing the top half of the standings. 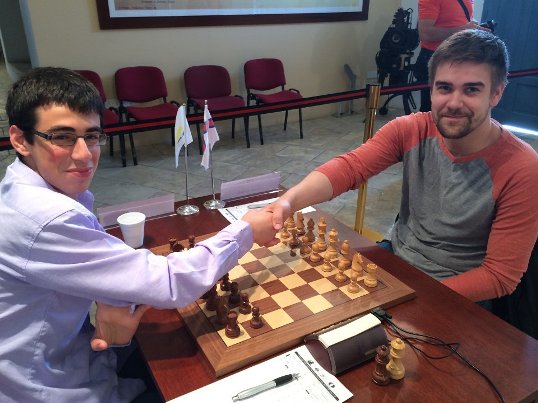 Further below, Antonis Antoniou scored his first (and only, obviously) win in the tournament, by beating Massimiliano Maccapani, while Renato Frick completely turned the tables from a very awkward position against Oliver Said, first managing to simplify to a holdable ending, then completely equalizing the chances and, finally, exploiting a blunder by his opponent to snatch the full point.

Of course, taking the standings into account, all interest was focused on Wiedenkeller-Berg, particularly after the other games had concluded. White obtained a slight plus from the opening, and an unwise attempt to free his position left the Faroese facing numerous threats from the very active white pieces in the centre.

In the end, he opted to sacrifice his queen for rook and piece, but this didn’t alleviate all the difficulties, as his pieces remained passive and uncoordinated. With pointed play, Wiedenkeller kept pressing for the initiative and eventually won a few pawns, coming out of the time control with a won position.

Some care was still required, and, with everything at stake, caution was in order; this he exercised, and after some more moves Berg threw in the towel, being the first to congratulate his opponent on his excellent tournament success.

The event concluded with a farewell banquet and closing ceremony in Sun Hall Hotel, right next to the playing hall. 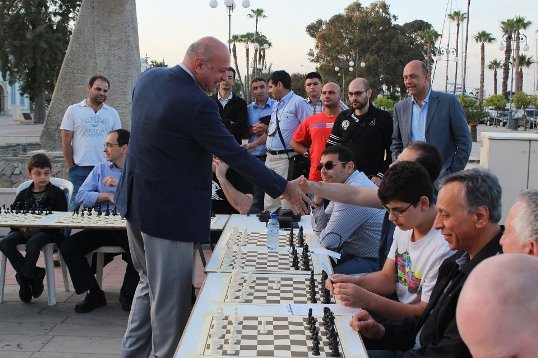 Congratulations were extended to all those who made this event happen: those who conceived it, those who provided the funds, those who worked hard to organize it, and of course those who participated and played the chess!

It is hoped that all guests will return to their homes with fond memories of a thoroughly enjoyable tournament and Cyprus hospitality!

The event was organized by FIDE, the Cyprus Chess Federation (KYSO) and the European Chess Union, with sponsorship from the Larnaka Tourism Board and the Municipality of Larnaka, and took place at the Larnaka Museum Historical Archives from April 22nd to April 30th.

Full coverage of the event can be found at the official website, http://larnaca2014.fide.com, with results, standings, news and photo galleries.