Food for every taste, specialties coming from all over the world and more. On June 20-28 the biggest world nutrition exposition will offer the chance to taste some “food for the mind” thanks to “Expo Milan 2015 Chess Move”, a unique chess event.

It is simply unique not only because it takes place during an event which gathers people from 140 countries worldwide and which is expected to attract more than 20 million visitors from all over the world; but also because of the locations.

The tournaments, addressed to players with every kind of ranking, will take places in two different venues: the Steam Factory (located in Sempione, close to Arco della Pace and Porta Garibaldi railway station) will host all tournaments during the weekends (June 20-21 and 27-28), while “I Navigli” Chess Club, which is located very near to the Duomo Cathedral and is also the home of Milan Chess Academy (which organizes the event with Asd Chess Projects), will host the International Open during the week.

The main tournaments will feature two contemporaneous events. On Saturday 27th, the Academy chess square in piazza Gae Aulenti and the Steam Factory will host a blitz marathon, with a 1,700 euros prize fund, where 50 players will fight on chessboards for 10 hours non stop (GM Danyyil Dvirnyy, who won Italian championship in 2013, has already registered). The Regional U16 team Championship will take place on Sunday 21st and the winners will go to National final.

About young talents, Italian U10 Champion Ieysaa Bin-Suhayl, will be the ambassador for the chess event: born from a British father with Asian roots and an Italian mother from Sardinia, Ieyssa is no doubt the best testimonial for an event like “Expo Milan Chess Move 2015”, which combines Fide motto “Gens una sumus” with the multicultural mood of the world Nutrition event.

Speaking about food and chess, recently no less than World Champion Magnus Carlsen underlined the benefit of a fitting nutrition in chess: Carlsen might be known worldwide not much for his undeniable strength on the chessboard rather for being a model with actress Liv Tyler for US brand G-Star clothing advertising campaign.

During the very strong tournament in Shamkir, Azerbaijan, which he won last April, he said: «I am on travel due to my career. Sometimes I am having a challenge with getting used to the cuisine of a host country. For this reason my chef is always with me. He provides me and my team with a special food». And also: «Nutrition is very important. Believe me, when I don’t have a mood, my chef inspires me with special food. He knows what I like very much».

Therefore: a fitting nutrition can earn a winning move.

MILANO (Italy), May 20, 2015 – He is only 10 years old and yet he is one of the most promising Italian chess players, which is why he has been chosen to be the ambassador for the “Expo Milan Chess Move”, a chess event, which takes place (June 20-29) during the biggest world nutrition expo.

His name is Ieysaa Bin-Suhayl and he is a Maths genie. When he was only 8 he achieved an “A” in Maths GCSE (General Certificate of Secondary Education), which is an exam usually taken by 16 years old students: actually he was very close to an A+, a real record-breaking.

Lately he took A level Mathematics, which is far more challenging – he has to wait until August for the results –; he also took part in «Child Genius», a national TV programme.

Math calculation is a piece of cake for Ieysaa and he does just fine with chess calculation as well, but if you ask him in which one it is more difficult to improve, he has no doubt: «Chess!». 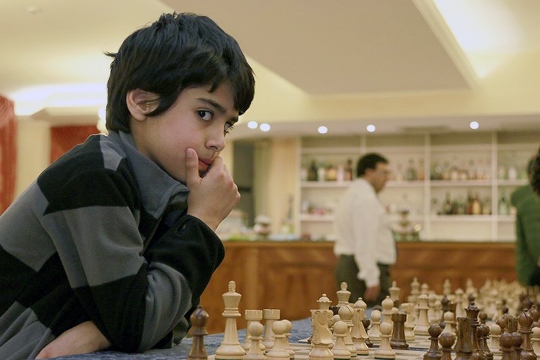 Ieysaa lives in Marshland St. James, a small town in Cambridgeshire, where time seems standing still: he attends home school under his parents’ tutoring and he has chess in the blood, but above all this he has the will to stand out, which is the typical champion mood.

His mum, Tomasina Contu, from Sardinia (Italy), moved to England in 1994 and can confirm: «I believe that at the moment determination is one of Ieysaa’s main quality: he doesn’t give up till the very end».

This very young chess talent won U10 Italian Championship in 2014 with a perfect 9 out of 9 and is no doubt the perfect ambassador for “Expo Milan Chess Move”: with his British father – from Indian origins – and Italian mother – plus three brothers and one sister – Ieysaa represents both Fide’s motto “Gens una sumus” and the multicultural mood of Expo 2015.

Speaking about food, Ieysaa’s favorite is Indian curry with chicken, but he adds: «I also like pasta very much!». Ieysaa family’s diet is very assorted, but «Food must be fresh», emphasizes Tomasina, «starting from passata: I cook it following my granny’s recipe». Tomasina’s delicatessens include «a lot of dishes from Italian tradition, such as pizza. But it has to be fresh: we don’t buy processed food, we prepare everything from scratch».

During chess tournaments Ieyssa chooses «healthy food such as raisin and nuts; he drinks a lot of water, too» and sometimes he eats some chocolate, «though it is not very healthy». «What Ieysaa doesn’t like very much is cold food, such as sandwiches».

Ieyssa loves the international environment in chess too, as he had the chance to experience it in U10 world championship which took place in Durban, South Africa, last year: «He had a lot of fun and he played with a lot of players from different countries also beside the tournament», says his mum.

Among all his unforgettable games Ieysaa chooses one played during the U10 world Championship as one of his favourite: he played it against Russian Dmitry Tsoi: «He was fourth on the starting rank and finished third». From the round after their game together «the two had became friends and when one of them finished his game he run to the other’s chessboard to watch his game. It was very nice», said Tomasina.

In South Africa Ieysaa built good relationships with the whole Italian group and in particular with Francesco Rambaldi and Matteo Pitzanti: «They had a lot of fun since the group experience was essential. They usual met all together to play blitz in the evening or in the middle of the night. It was amazing and he loved this experience», adds Ieysaa’s mum «he was very fond of Francesco who became his hero, like Magnus Carlsen».

In South Africa Italian team was followed by IM Fernando Braga and Daniel Contin «who were amazing and created an awesome relationship with all the kids», but Ieysaa has no regular trainer yet: «He has started playing regularly with a Swedish player. He is very good: we have met him thanks to a FM from Czech Republic», reveals Tomasina. «He heard about Ieysaa and contacted us. Ieysaa is improving a lot with him, well not much in results, but in his game and positions’ understanding. We will check results later».

Ieysaa, who is now a member of Cagliari Chess Club, has big plans for his summer with some tournaments waiting for him in Eastern Europe: «My goal», he says «is to reach 2100 Elo before turning 11», which will happen next August 22nd.

Ieysaa’s family hopes to visit Expo during summer as well: «We might decide to take a break after the tournaments and visit Milan» concludes Tomasina. «I have already been there, but I can’t say that I know the city well. We would really like to visit it».