Minkochess 1.3 joined Onno in the leaders position of TCEC Stage 1. It defeated Nebula 2 in its first game of the computer chess show, that started this August 26th.

Minkochess, rated 2847 ELO, was the favorite in the match by estimated over 400 ELO points. In a Caro-Kann, Minkochess took advantage right from the start after a dubious 10… Bd6 by its opponent. Nebula showed good understanding of the position in the middlegame up until 18…Nf5, which gave a very solid advantage to white. Minkochess “forgot” it is an engine with the “human” moves 38. Qd5 and 39. Qb5, still solid and heading to victory. Soon black was in zugzwang, forced to move a pawn, and the game was over. 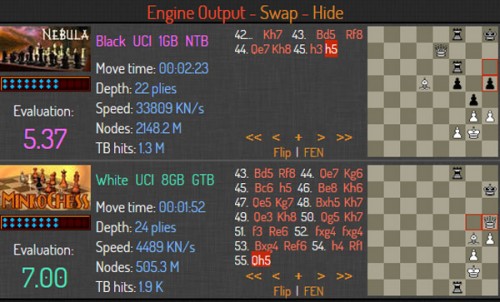 Minkochess 1.3 heading to victory. At the diagram, it calculates how to get black in zugzwang and forces its opponent material

MinkoChess is an advanced free open source engine licensed under the GNU General Public License, written in C++ by Borko Bošković. MinkoChess is UCI compatible and can be compiled for Linux, Android, Windows, and Mac OS X. It can use Gaviota’s tablebases and Polyglot’s opening books. MinkoChess performs a parallel search using threads, PVS with singular extensions, and determines sliding piece attacks with magic bitboards.