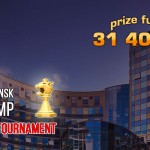 The Minsk Amateur is a 9-round Swiss tournament.
The tournament is held from June 24 (arrival day) till July 2 (departure day) 2018, at the address:
Minsk, Republic of Belarus, Avenue of the Winners, 103, hotel “ViktoriyaOlymp”

Everyone has the right to participate in the tournament, except for the holders of the title “International Grandmaster” among men and players with FIDE rating above 2325.

Playing details:
The chess amateur Tournament is held on the Swiss system in 9 rounds.

Time control – 90 minutes to the end of the game + 30 seconds for each move made, starting with the first.

Places Definition:
In the case of equality of points for two or more competitors, the holder of a higher place is determined by the following criteria:

Buchholz Tie-Breaks ( -1 weak opponent);
Result of players in one point group;
Average rating of opponents;
Greater number black games;
To determine the winner of chess amateur tournament in the case of sharing the first place by two or more participants ( the first two by the coefficient), an additional match of two games is played with time control 10 minutes +5 seconds per move to the end of the game. In the case of equality Armageddon is played: white gets 5 minutes, black gets 4 minutes, starting from the 60th two seconds per move are added.