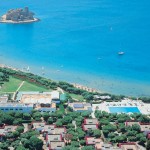 The 36th edition of the Mitropa Cup is being held in Isola Capo Rizzuto, Italy, from May 30th to June 9th.
The traditional team event this year brings together 10 nations competing against each other in an Open and a Women section on 4 boards each.
Austria, Croatia, Czech Republic, France, Germany, Hungary, Italy, Slovakia, Slovenia, Switzerland.

The Mitropa Cup is the annual team chess
tournament for national teams from Central Europe. The word Mitropa is a derivative of German
Mittel Europa (Central Europe): MITtel euROPA.
The idea of the Mitropa Cup came from Gertrude Wagner, who wanted to create a chess team
tournament after the example of respective football competition, together with her husband Karl and
the president of the Austrian Chess Federation Kurt Jungwirth were the founders and organizers of
the tournament. The event commenced in 1976: Grtrude will organize the next twenty editons.
The event commenced in 1976 in Innsbruck. Germany, Austria, Yugoslavia, Switzerland,
Italy and Luxembourg participated (Austria and Yugoslavia with two teams). Germany won this
first tournament. On the next year the second edition took place in Bad Kohlgrub, West Germany,
where Austria chalked the trophy.
From 1978 until 1991 West Germany and Yugoslavia dominated the event just to rotate at the
top of the table, with the sole exception of 1982, when France took their first win playing on the
home soil. The list of participating teams was very stable: Yugoslavia, West Germany, France,
Austria, Switzerland, Italy and Luxembourg.
The early 1990s saw major political changes in Central and Eastern Europe, i.e. dissolution of
the Soviet Union, Czechoslovakia and Yugoslavia as well as unification of two German states.
Yugoslavia withdrew from Mitropa Cup in 1991 following factual dissolution of the Yugoslav
federation and the UN embargo imposed on Serbia. The former Yugoslav republics to enter the
competition were Slovenia and Croatia. It must be stressed that team labelled Yugoslavia, who won
the trophy in 1991, comprised of Slovenian players.
Czechoslovakia appeared in 1991 but as soon as the state federation was dissolved two
independent republics, the Czech Republic and Slovakia emerged to join the cup. Another landmark
event was Hungary’s accession in 1990. Luxembourg left the competition in 1990 while the
Netherlands appeared twice: in 1993 and 1995.
Starting from 1995 the Mitropa Cup saw the size extended from 7 to 10 teams.