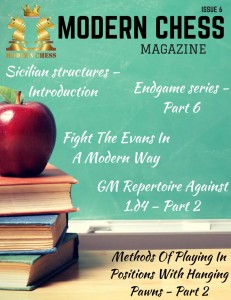 Modern Chess – the pdf and pgn magazine by Grandmasters for aspiring players – has its February edition available in the Chessdom shop here.

The magazine is also available in two discount packs:

More from the Modern Chess authors

Play with or against 1.d4 – databases by GM Chatalbashev and GM Arnaudov

Modern Chess February content – for only 9,90 at the Chessdom shop

Methods Of Playing With Hanging Pawns – Part 2 – In his previous article on that topic, GM Grigor Grigorov has examined all the basic ideas we can use in our fight against hanging pawns. In the present material, he looks at this structure from a different angle. This time GM Grigorov deals with the possible ways of playing WITH hanging pawns.The fact that every single idea is explained in great detail makes the article extremely useful not only for experts, but also for every club player who wants to improve his positional play.

Fight The Evans In A Modern Way – Despite of the fact that nowadays computers managed to refute a huge amount of gambits, there are still some inventions of the old masters that continue to cause us nightmares. As a typical example we can take the extremely dangerous Evans gambit.The popularity of this opening among top players is a clear testimonial of the complexity of this opening. Fortunately, our new author GM Vladimir Georgiev shares with you his own repertoire against the Evans. The main position of the article arises after the moves 1.e4 e5 2.Nf3 Nc6 3.Bc4 Bc5 4.b4 Bb4 5.c3 Ba5!. From this point, GM Georgiev starts examining Whites different options.His article is rich of original new ideas which could not be found in the existing chess literature.After reading it, you will never fear Evans anymore.

Sicilian Pawn Structures – Part 1 – In chess, there are is no opening which is as popular, complex and rich as the Sicilian defence. Due to the endless amount of possibilities for both sides, a lot of players face difficulties when preparing this opening. According to the Russian Chess School, before starting to explore a given opening, we should first learn to handle the arising pawn structures. While lines and sub-lines changes over time, pawn structures remain stable.The author of the present article GM Viktor Gavrikov is convinced that this structural approach to the opening is the only possible way to study the Sicilian defence.In his first article, he examines one of the most popular Sicilian structures which occurs in variations where, at some point, Black plays the move e7-e5. More precisely, GM Gavrikov focuses on the structure arising after the exchange on “d5” where this square is occupied by a white pawn.After reading the present article, you will have better understanding on a number of Sicilian lines.

Endgame series – Part 6 – Our endgame expert GM Davorin Kuljasevic continues to reveal the secrets of the final stage of the game. His present article features two types of passed pawns which occur quite often in practice – defended passed pawn and outside passed pawn.In general such pawns are a long-term asset the value of which is not optimally used by the majority of the chess players.Being loyal to his systematic educational approach, GM Kuljasevic brings to your attention all the subtleties related to the play with such passed pawns.

GM Repertoire Against 1.d4 – GM Boris Chatalbashev – In issue 6, we continue our journey along the subtleties of the Late Benoni. After presenting the main line in his previous article, now GM Chatalbashev deals with the possible transpositions to KID and Modern Benoni.Just like in his first article about Late Benoni, GM Chatalbashev continues to explore the opening from a practical point of view. That is the reason why you will be able to successfully apply your knowledge immediately after reading his articles.