The second day of the 3rd Round of the World Chess Cup in Khanty-Mansiysk finished in an unexpected way. After six-hour-matches there was only one game played in the empty tournament hall: David Navara (Czech Republic) was converting the decisive material advantage (Queen vs Rook) against Alexander Moiseenko (Ukraine).

Having beaten down the desperate resistance of the opponent, Navara achieved the position where either mate or the loss of the rook was inevitable and at that moment he offered a draw. The situation was clarified by both Grandmasters.

David Navara: – On the 35th move I accidentally touched both pieces, the King and the Bishop. I wanted to move my bishop on d6, but clipped the King also, however, Moiseenko claims that I have first touched the King, but I am not sure about that. Any move with the King would lead to the loss of the piece, however, Moiseenko did not insist that I make a move according to the touch rule. I did not want to be referred to as an unethical chess player who managed to win in an unfair way, that is why at the end, having achieved the winning position, I offered a draw. 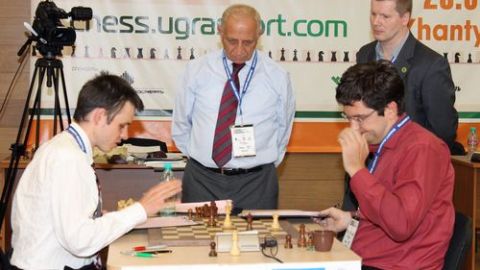 Alexander Moiseenko: – Navara on the 35th move first touched the King. I told him: the King moves. However, I realized that my opponent accidentally made this mistake, it is not possible that he could so easily blunder the piece. This is the reason I did not insist on his move with the King.

Let us remind you that if you are knocked out in the 3rd round you get 12800 dollars, and the qualification for the 4th one guarantees you the minimum prize of 20 000 dollars. Besides, the winner of this match will continue fighting for three tickets to the World Championship.

The extraordinary situation was commented by our expert – Grandmaster Sergey Shipov:
– I think that both opponents acted in an extremely honorable way. Today, in these difficult times, our heroes are risking the qualification to the next round, which means jeopardizing serious money for the sake of preserving their reputation.

This story came to knowledge of the Khanty-Mansiysk Autonomous Okrug-Ugra Governor. Natalia Komarova declared on her decision to establish a special prize of the World Cup – “Fair play”:
– No doubt that the whole world will highly appreciate the mutually noble deed of the Ukrainian and Czech chess players. We go for nobility, at the chess board as well as in the everyday life.

– I am very proud of both sportsmen who acted in accordance with FIDE motto: Gens Una Sumus, – summed up the FIDE President Kirsan Ilyumzhinov.