The First Mongolian Nations Chess Tournament takes place from 13 to 20 March 2016 in Ulan Bator, Mongolia. It is a round robin tournament (Men’s and women’s sections) having 4 chess players from Mongolia and one representatives per each regions of Inner Mongolia, Republics Buryatia, Tyva and Kalmykia (Russia). Prize fund of both sections is 48 000 000 MNT – 24000 USD.

Round 2 of the First Mongolian Nations Chess tournament started at 15.00 in the Conference Hall of the Chinggiz Khan Ulan Bator hotel. All games of the women’s section were resultative.

WFM of Mongolia Anu Bayar outplayed her unrated opponent from Inner Mongolia Tsailgan. Anu plays chess already for 12 years, having started when she was 11 years old. One of her biggest achievement in chess was the gold medal at the World Amateur Chess Championship 2011 in Antalya, Turkey. She has 2/2 after second round. 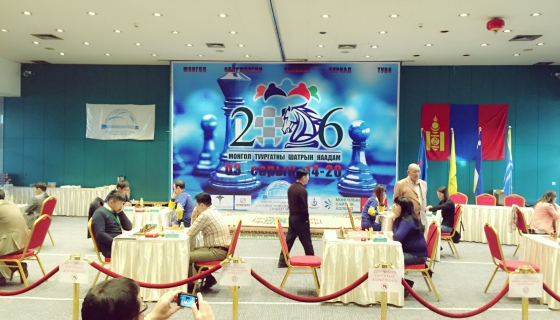 Anu: It was not easy at all to win against my opponent from Inner Mongolia. I followed her first round game and noticed that she plays good enough. So, I tried to prepare for my game against her in a proper level.

I feel really great to have an opportunity to play with players of Mongolian nations from all over the world. It also feels very nice to participate in an international competition which takes place in your own city. This is my first time.

As for Round 1, it was not easy to win a game against a chess player Aisu from Tyva. I guess everyone has made a lot of preparations to this competition, so does she. The position was very confusing. If she moves something really bad, it would lead to a loss. It took her a lot of time to calculate, and she simply did not manage. But she was fighting hard. So, the tournament is very tough for everyone.

Aisuu: I am very happy to be a part of such a great event. I started playing chess when I was four. But I considered chess more seriously at the first course of the Tuva State University, now I am a third year student. Again, I am very excited to play here. Truly speaking, this is my first time when I play on such a big professional chess board. Plus, the playing conditions are fantastic, most of all I like food here.

Unfortunately I play not so good so far: I lost my first game to the Mongolian player Anu Bayar. Second game was also lost to Inna Ivakhinova. These two players are very strong and professional. I am happy that I gain a lot of experience playing against them. I must confess that I spend a lot of time for calculations, also I am very stressed, taking into account that this is my first big international event. I also feel that I have some lack in calculating the variations. 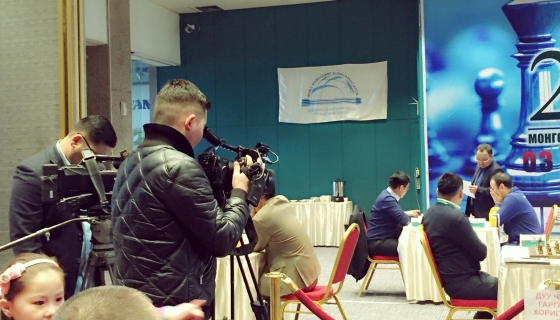 Inna Ivakhinova: In fact the game against Aisuu was not simple. After the opening I had better position. But later on the game turned into a direction which I did not expect. I was planning to push in the center to further outplay my opponent. As a result I had to attack and move all pieces on a king side. I opened my king with g4 move. I had an advantage further on and my opponent mixed up a bit. I managed to win in a comparatively good position though.

As for the organization of such a tournament in general, I would like to say that I liked the idea very much. I don’t play chess that often lately. But when I got to know that there is an opportunity to participate in such a round robin, I accepted the invitation with pleasure. I am sure it is a good start and I hope that this tournament will become traditional. The organization of the event is on a high level, we like everything. Though I ended my first round in a draw in a better position, winning my second round, I hope for better performance in the next rounds.

WGM Baira Kovanova (2389) of Kalmykia outplayed her opponent of the second round Otgonjargal Sengeravdan of Mongolia. Here what Baira said about the organization of the tournament and her first round result:

Baira: A unification of Mongolian nations by organizing chess competition is a great decision. The organizers have gathered us in a tournament, where we can not only play chess and show what we can, but also the idea raises the patriotism and motivates for good deeds for your country. This is my first time I play in such a tournament.

I like the playing conditions very much, though I did not play well my first round. Perhaps the jet lag could be called one of the reasons, but this is the fact: I played not well. Moreover, my opponent had an advantage in the endgame, but luckily for me she forced a draw. So this is about me: I always start a tournament not well. I won a game in the Round 2 against WIM Otgonjargal from Mongolia comparatively quickly. I try to recover and get back to a normal shape. 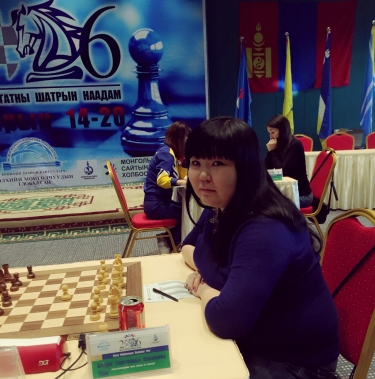 The game between two Mongolian chess players Uuriintuya Uurtsaikh (2255) and Ankhchimeg Bayanmunkh (2121) ended with a victory of Uuriintuya. Uuriintuya’s best performance was the 4th place at the World Youth Chess Championship U-18 2015. That is what she says about the games and tournament in general:

Uurintuya: the game was really complicated. We played Cheliaybinsk variation. My opponent had very active pieces. In the middle game she had better position, but I was lucky today.

This tournament is very special. As many other say, it has a meaning of unification of all Mongolian nations in one tournament. It gives you more patriotism and pride for your nation. The best players from Mongolian nations are here. I am happy I am a part of it.