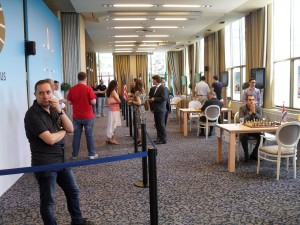 The second round of the FIDE Grand Prix tournament in Thessaloniki produced more decisive results and now we have as many as five players sharing the lead with 1,5 points each.

Alexander Morozevich, Fabiano Caruana and Alexander Grischuk took advantage of the white pieces and signed important victories. The other three games were drawn.

The Grand Prix tournament is attracting huge attention in Thessaloniki, the chess capitol of Greece. Even on the working days, around 100 people join the commentator GM Ioannis Papaioannou in the Salonika bar of Makedonia Palace.

In addition, GM Stelios Halkias and FM Sotiris Logothetis are providing live English commentary for the official website. Guests are commonly joining in to share their thoughts on the games. Today we had an honour to welcome the reigning Greek champion Antonios Pavlidis in the commentary room.

Ponomariov aimed to play the popular Marshall Attack in the Ruy Lopez, but Dominguez deviated with the quiet 8.h3 and 9.d3.

Black prepared the d5-push and comfortably equalised. White released the tension on the a-file and exchanged a couple of pieces. Immediately after that the players silently agreed to a draw with the three-fold repetition.

Dominguez said that he was surprised by the black’s opening choice and decided to play solid. Ponomariov based his preparation on the game that Leinier played with white against Kasimdzhanov in Tashkent. He also analysed some games from the recent European Championship in Poland. 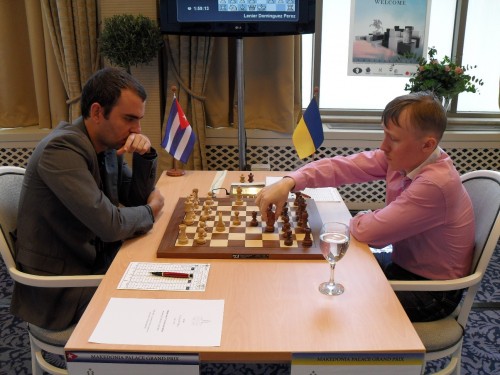 Bacrot revived the old main line against the Gruenfeld Indian defence that is occasionally springing into popularity thanks to the efforts of Gelfand and Kramnik. He however played the direct 13.Rxb7 instead of the more popular Bg5 or Be3.

This system allowed black to take down the central d4-pawn, which is often white’s main trump in the resulting endgames. Here white relied on the Rook on the 7th rank and pressure against the f7-pawn.

Black was on time to activate his pieces and contest the 7th rank. After the massive exchanges of heavy pieces, draw was singed on move 35. 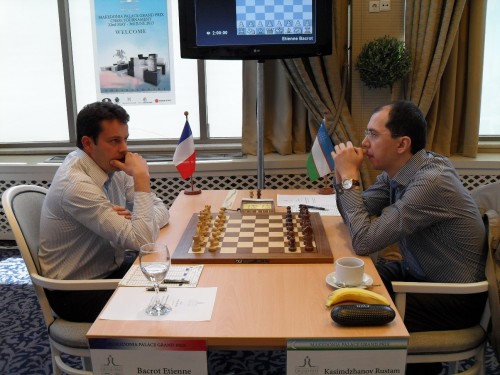 The match started as a Four Knights Game and Svidler opted for the active Rubinstein variation. Black sacrifices a pawn but gets good compensation as white pieces are a little bit clumsy.

Black challenged white’s foremost pawn on e5, but Morozevich didn’t want to dig in with 13.Bc2 and 14.f4, but instead went for the inspiring b4-b5 advance.

Later we learned from Morozevich that this was his attempt to activate the pieces on the queenside. He was aware that black might have obtained a strong attack on the white King, but he decided to take the risk.

White pressed the opponent’s c6 and d5-pawns, when black erred with the unfortunate e5-e4 push. This move was a logical attempt to grab the space and liberate e5-square for the pieces, but unfortunately for Svidler it had a tactical flaw.

Svidler tried to cause some trouble on the kingside, but this was too slow as white simply captured everything on his way and promoted a new Queen on a8.

Morozevich said in the press conference that his computer broke down last night and he couldn’t access his database. The only files that were available were on the Four Knights Game, so he was forced to go with this opening. 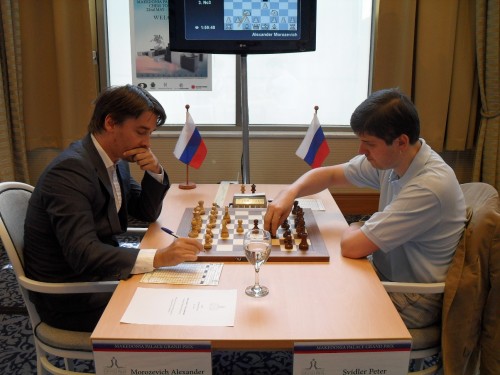 This was another Gruenfeld Indian defence, but here Topalov employed Kramnik’s plan with g3 and e3. Only few days ago he used the same system against Jon Ludvig Hammer in Norway Chess tournament.

Kamsky improved on that game with 8…a5 and 9…Ba6, forcing white Knight to a less active square d2.

After some maneuvering with the pieces, Topalov decided to force matters with 19.Nxd5 in attempt to exploit the bad placing of the black Queen.

However, later he admitted that this backfired to him as black obtained a very active play and even a slight advantage. For the rest of the game white struggled to contain the heavy influence of black’s dark-squared Bishop and eventually succeeded on move 47. 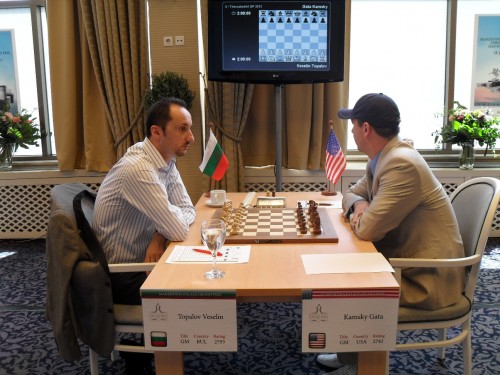 Ivanchuk decided to defend with the deferred Ruy Lopez Steinitz to which Caruana responded by trading the pawns on e5 to clarify the structure in the center. 8.d5 instead of 8.h3 would lead to a totally different setup, reminiscent of the King’s Indian defence.

Caruana exchanged the dark-squared Bishop for opponent’s Knight and after 19.Qa4 obtained a slight advantage.

Ivanchuk probed Caruana’s mood with an offer to repeat the moves, but the Italian didn’t entertain his wishes and instead sacrificed an exchange to win some pawns and structural advantages.

Additional problem for black was the passivity of his dark-squared Bishop as opposed to the dangerous jumps of white Knights. White gradually improved his pieces while black was condemned to wait and see what will happen.

At one point, black missed the opportunity to deploy the Rook(s) on the a-file and slow/prevent the advance of white pawns. Caruana marked 44…Kf6 as a mistake after which he is probably winning.

Once the pawns started rolling, there was no chance for black to save the game. 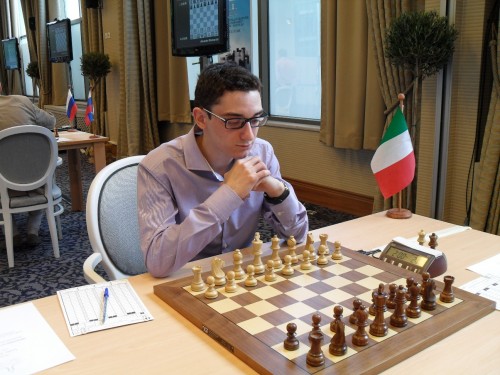 Black played the Neo-Arkhangelsk variation of the Ruy Lopez, which was broadly analysed after the inspiring games of Shirov and Ivanchuk.

Nakamura repeated 15…Re8, the move that he introduced in the game with Leko in Wijk an Zee. Grischuk deviated from that game with the direct 18.Ba4 and 19.Bc6, which is exactly the place where the Bishop wants to land. White gained some tempi in the process as black Rook retreated to f8 (18…Re6!? was interesting).

Black could have maneuvered the Knight to kick the annoying Bishop from c6, but instead he went for the central blow 21…d5.

White had an extra pawn, but his structure was demolished.

After the long shuffling, some pieces started to be traded off the board. The commentators felt that Grischuk could have exchanged the h5-pawn for b3-pawn while keeping both pairs of Rooks on the board.

An interesting endgame with R+B+3P vs R+B+1P emerged. White still had doubled pawns and Nakamura had some hopes of salvaging a draw. But then he conceded the 5th rank to white Rook and the things started to go downhill.

Grischuk forced trade of the Rooks to reach a winning Bishops’ endgame and finally clinch a victory. 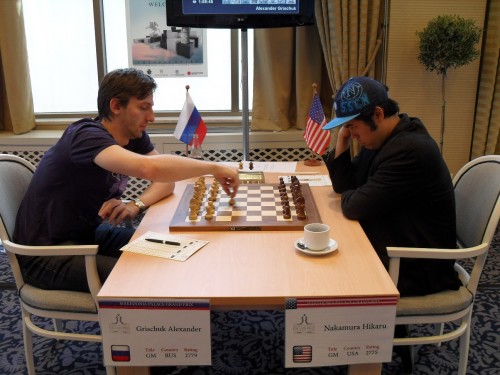